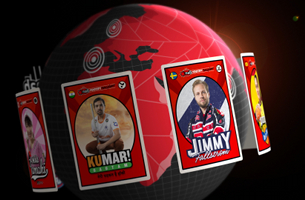 Clemenger BBDO Melbourne and NAB are launching the next phase of their Footify Fansplant campaign.

Fansplant has seen five of the world’s most passionate sports fans from around the globe flown to Australia to be Footified.  After an extensive international search, the NAB ‘Fansplantees’ were selected from India, USA, Japan, Spain, and Sweden.

The Fansplantees were quite literally dropped into the homes and lives of footy loving Australian families. Host families were selected from hundreds of entries and were tasked with teaching the Fansplantees everything there is to know about Aussie Rules. It was certainly a steep learning curve for the Fansplantees and every step of the journey was captured.

The culmination of the campaign sees NAB call on footy fans across the country to decide which Fansplantee deserves to be crowned the ‘most Footified’.  Fans are encouraged to cast their vote online for the chance to win a trip for two to the winning Fansplantee’s home country.

Clemenger BBDO Melbourne Creative Director Rohan Lancaster says he is proud to be helping NAB grow AFL on a global scale. “AFL’s appeal is its sheer mix of physical disciplines. It’s Australia’s game, but we want to make it the world’s, by showing that it has something for everyone, especially sports fanatics,” he said.

Kevin Ramsdale, NAB’s General Manager Consumer Marketing, said that Fansplant is another demonstration of NAB’s commitment to growing Australia’s game. “Footify has been built upon the premise that at NAB, we don’t just sponsor the game, we grow it. We’ve been Footifying Australia for over ten years through NAB AFL Auskick, the NAB AFL Rising Star program and the NAB Challenge and it’s been exciting to expand this commitment on an international scale through Fansplant,” he said.

“It’s been remarkable watching each of our Fansplantees progress from footy novice to fully-fledged fan.  We can’t wait to see who Australia votes as the most Footified,” he continued.

NAB’s campaign has showcased the journey of the Fansplantees and their host families through webisodes, digital, press, NAB customer channels, and via social media.

To find out more and vote, check out nab.com.au/afl.