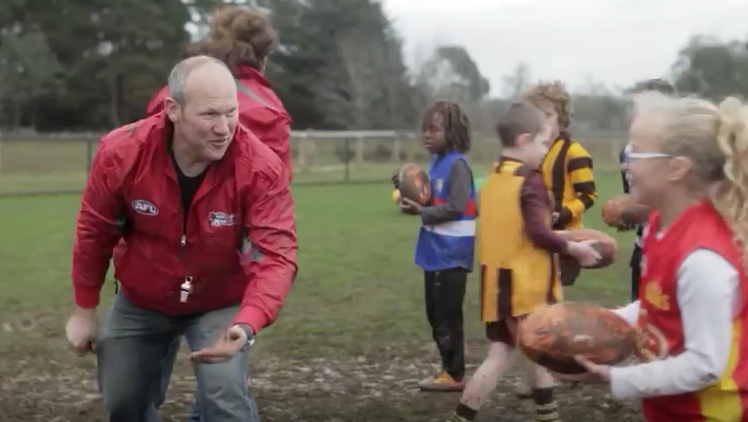 The next iteration of NAB’s Fanshake campaign sees NAB call on this friendly sense of rivalry, asking fans to put more than pride on the line for their chance to win the ultimate 2015 Toyota AFL Grand Final experience.

Yet another chapter in NAB’s bid to Footify Australia, Fanshake encourages footy fanatics to go head-to-head for the greater good of the game. Fans and sporting personalities right across the country have already pledged their loyalty which has seen the likes of Billy Brownless, Jude Bolton, Luke Ball and Mark Beretta give back to the football community.

The next iteration of the campaign sees NAB depicting some footy fans making good on their pledge after losing their Fanshake at a local NAB AFL Auskick session. They are rapidly introduced to an energetic clan of Auskickers and embark upon doing something good for the game by teaching the youngsters the basics of goal kicking, speckies and handballing.

Tim Clarke, NAB’s head of sponsorship believes the Fanshake concept embodies NAB’s commitment to make a tangible contribution to the game – to not just sponsor footy, but to grow it.

“Fanshake is tapping into the existing rivalry between fans but harnessing it for the greater good of the game. It’s this sentiment that underpins our decade long partnership with the AFL,” Clarke said.

“It’s been fantastic to see fans challenging fellow supporters and particularly pleasing that familiar faces in the footy world have been willing to put their loyalty on the line and deliver on their promise to do something positive for football,” he added.

“One week we had Lenny Hayes painting faces of footy goers at Etihad Stadium, the next we had Mark Bickley cutting up oranges for Gavin Wanganeen’s son’s Under 12 footy team in Walkerville – it’s been overwhelmingly positive and reached all corners of the country,” Clarke finished.

Clemenger BBDO Melbourne is the creative agency behind the campaign, which has been running nationally since April.

“The idea that NAB can use their sponsorship to grow the game they’re so dedicated to is admirable. This campaign was designed to harness the passion of footy fanatics Australia-wide and give the winners something else to gloat about after a game,” said Rohan Lancaster, Clemenger BBDO Melbourne creative director.

It’s a perfect finish to a great day at the footy. And a great way for NAB to encourage more footy fans to get out there and contribute to the game they love,” he added.

To set a #fanshake with a mate and be in the running for the ultimate 2015 Toyota AFL Grand Final experience, visit nab.com.au/afl.