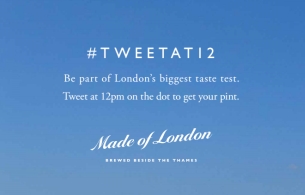 Fuller’s is inviting people to join its daily brewery taste test with a free pint of London Pride, thanks to a unique new social media campaign created for the British real ale brand by The Corner. Every day for two weeks, Londoners who tweet @London_Pride at midday using the hashtag #TweetAt12 will receive a code for a pint on the house, redeemable at Fuller’s pubs around the capital.

Fuller’s hosts a taste test at 12pm each day at its Chiswick brewery, with staff ensuring the quality of its London Pride ale is consistent - the campaign brings to life the lengths the brewer goes to in maintaining its high standards. The activity follows last year’s #EmptyPint campaign, which saw drinkers tweet a picture of their empty pint glasses and receive a free refill, generating 5.7 million impressions for the brand. 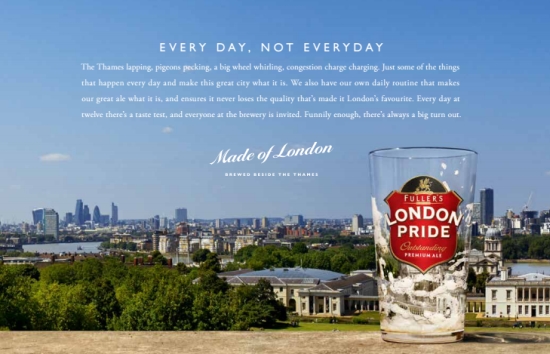 The #TweetAt12 campaign will see two executions on 48 sheets and 6 sheets across the capital, and in press including: Timeout, The Metro and The Evening Standard. Social activity will take place across Twitter, Facebook and Instagram. Along with the redeemable code, London Pride will also send people a link to a taste test video from Fuller’s head brewers, pointing out what to look for when tasting a pint of its real ale.

Jane Jones, Marketing Director at Fuller’s said: “We wanted to deliver an act of generosity to Londoners, expressing the lengths we go to in ensuring a pint of London Pride is of the highest possible quality – It all comes down to the expertise, knowledge and hands on approach of our expert brewers. By inviting people to partake in their own taste test, they can judge for themselves and let us know what they think.”

Neil Simpson, founding partner at The Corner said: “London Pride is a quintessential part of our capital’s heritage, and Fuller’s is the last remaining family brewer in the city. Following the success of last year’s #EmptyPint campaign – which saw codes redeemed at close to 100 pubs across London – we wanted to find a creative way to involve Londoners in one of Fuller’s oldest traditions.”