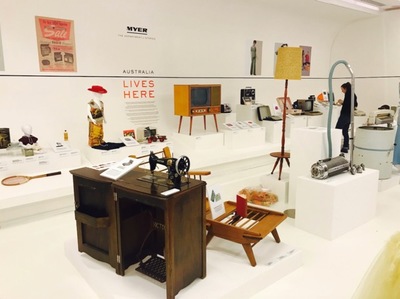 Myer has launched a new exhibition at Myer Melbourne. The exhibition is the centerpiece of Myer's 'Australia Lives Here' campaign via Clemenger BBDO, Melbourne and profiles 100 items sold by Myer between 1900 and 2000.

The items have been selected for the roles they have played in Australian lives and the many memories and stories that are associated with them - some examples include the Sony Walkman, the Ronson Escort strap-on hairdryer, a first-edition Prue Acton dress and a classic 80's shell-suit along with a pair of Reebok Pumps.

30 items on the exhibition list are missing and Myer is calling on people who have these items to submit their story at australialiveshere.myer.com.au. If you have one of the original items, you could be in with a chance to win its 2017 equivalent.

Young, who is 100 years old, recently moved into a nursing home. Her Great-Nephew, Anthony O'Toole has hung onto her 1956 AWA TV, one of the first models of TV ever sold in Australia. Remarkably, it's still in perfect working order and were it not for the analog signal being switched off a few years ago you could still get a picture on it.

Young has many happy memories watching her TV set with her family but also, tragically, one very sad one. Her husband Charlie was killed in an industrial accident in 1969 and Young saw news of it on the TV before she was officially informed by the Police at the time.

Says Michael Scott, EGM brand, marketing and loyalty, Myer: "Carmel's story perfectly demonstrates how Myer products are so much more than just 'things' people buy, they play integral roles in peoples' lives and form part of the memories and moments that people cherish. Our Department of Stories' brand positioning is built from that truth and it's great to see it come to life via this campaign."

Myer has also released two additional campaign films and will release a series of social films in the coming weeks featuring competition winners and their stories.

To see the list of items, find out more about the campaign or enter a submission go to australialiveshere.myer.com.au.