Myanmar Enters a New Era – But What Does it Mean for Advertising?

Trends and Insight 580 Add to collection 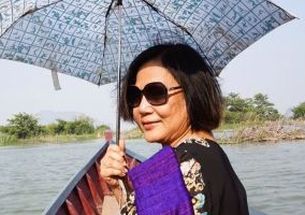 LBB’s Head of Communications and LBB/Lab, Rachael Delahunty, looks at the troubled history of marketing in Myanmar. Speaking to the founder of the country’s first agency SAIL, Dr Anna Khin Khin Kyawt, and the Founding Partner of Havas Riverorchid, Warwick Olds, she explores the impact of economic sanctions, and the promising future for marketers.

Myanmar, or Burma as it is also known, is a country with the most troubled of pasts.

Boasting an abundance of natural resources such as oil, natural gas, timber, and minerals, it was the richest country in the region when it gained independence from colonial rule in 1948. But following decades of oppressive military governing, and US imposed sanctions in 1993 in response to the country’s human rights practices, the country sank to one of the 20-poorest countries in the world by the mid-2000s.

A gradual liberalisation process has been under way since 2010, prompted by the lifting of economic sanctions. And this year saw the dawn of a new era for Myanmar, as the country swore in Htin Kyaw - the first elected civilian president in 50 years.

Htin Kyaw is a school friend and confidante of the democratic champion Aung San Suu Kyi – a Nobel Laureate who remained under house arrest for almost 15 years between 1989 to 2010, becoming one of the world's most prominent political prisoners. Whilst Suu Kyi, 70, is barred from becoming president by the junta-scripted constitution, Htin Kyaw is expected to act as her proxy.

So what has this difficult past meant for agencies in Myanmar, and what does it mean today for advertisers looking to move back into a once abandoned market?

Any exploration of the advertising landscape must start with one important character – Dr Anna Khin Khin Kyawt. Founder of SAIL, Myanmar’s first and largest ad agency, and credited with starting the industry itself in Myanmar, Dr Kyawt was an unlikely candidate to lead the charge for advertising, having trained at a prestigious medical university. Indicative of the difficult regime at the time, it was her inability to obtain a passport to continue her studies in the US that led her to a new career path. “At that time it would have been easier to lie in my application,” she admits, “in a country that was familiar with bribery and deceit, it is somewhat of a wonder that I became the woman that started advertising agencies in Myanmar. I am outspoken and often shoot myself in the foot, but my honesty has been integral to building a transparent and honest business.”

Dr Kyawt formed SAIL in 1991, importing and marketing Western pharmaceuticals, ICI, and Ciba Geigy. By 1995 it was the largest agency in the region, handling activation for major brands like Kodak and Samsung, for whom it erected the very first commercial-brand billboards in Myanmar. It was at this time that SAIL embarked upon a new partnership with McCann Ericsson, forming a joint venture that was unique to the market. The relationship led to them handling both above the line and below the line advertising for Unilever, and exciting projects like the launch of Myanmar Beer. 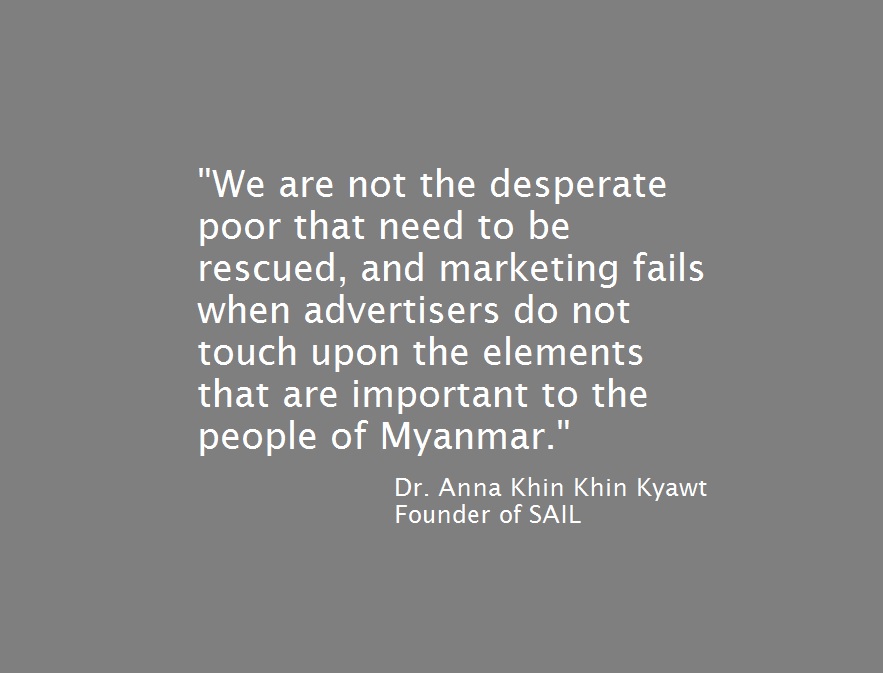 But it wasn’t long after these achievements that the western sanctions took their affect. “In 1996 we were supposed to hold the first beauty pageant in Myanmar, sponsored by Unilever products, but the sanctions were imposed and I was instructed to stop all above the line advertising and only continue with below the line,” says Dr Kyawt. “We had to carry on this way and I am still baffled as to how we managed to dominate the market without opening our mouths!”.

As the sanctions became more oppressive, clients quickly left Myanmar. By 1997 only Myanmar Beer remained with SAIL. “Overnight the clients left and all 32 banks pulled their local branches. The city was deserted at night,” explains Dr Kyawt, “and I had to let all of my activation team go. They moved to Chinese companies and eventually even Unilever left Myanmar, but I was not prepared to move.” Despite the pressures, Dr Kyawt stayed with SAIL and weathered the storm with other projects. “We decided to keep a low profile,” she continues, “and we worked on my grandparents’ medicine to keep the activation team active. We enhanced our distribution and activation network by opening more branches in regional parts of Myanmar. We put up billboards in all the cities as we knew we had to reach each audience individually. We had to adapt and this was the only way we could continue to operate.”

By 2012 the sanctions had started to relax, and later that year Dr Kyawt was invited to meet with Omnicom. The economic situation had allowed for new joint ventures and western agencies were keen to move back into the region. “We gladly aligned with Omnicom and our first job was to PR an event for Chelsea Clinton’s Save the Children campaign with P&G. We had to adapt and air eight different commercials within two weeks, which we managed in our house studio and editing stations.”

As the sanctions were lifted, marketers were keen to regain ground in Myanmar. But only those that had remained were truly equipped to understand their audience. “It is sad but international agencies do not know the local people of Myanmar,”, says Dr Kyawt, “we are proud, cheery, optimistic and fun. International advertisers for the most-part have a very narrow view of us – they see us as a nation that needs to be saved from poverty.

“Some ads that have been made by international agencies, such as Coca-Cola and Ooredoo when they first launched, are out of touch with local consumers. We are not the desperate poor that need to be rescued, and marketing fails when advertisers do not touch upon the elements that are important to the people of Myanmar.” 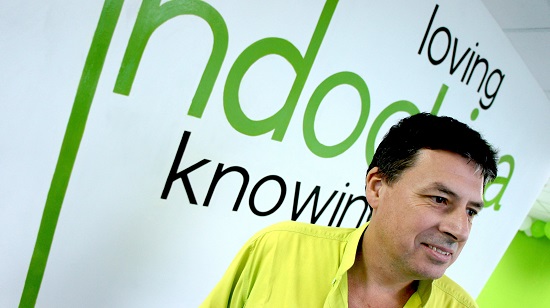 Warwick Olds is Founding Partner at River Orchard, the award winning agency with operations in Cambodia, Laos, Myanmar, Thailand and Vietnam, which was acquired by Havas in 2015. Having run operations across Indochina for over 15 years, Olds has seen the enormous changes enacted by the economic shift.

“We have been operating in Myanmar for 11 years now, and have lived and worked through the transformation that's occurred as sanctions have been relaxed,” says Olds. “We've witnessed the leapfrog phenomenon - for example people going from no mobile phones at all straight into 3G and daily mobile internet connectivity. That's just one example, but this crosses so many aspects of life ranging from international travel to the explosion of car ownership to fashion to learning.”

Both Dr Kyawt and Olds have a deep rooted history in the region and appreciate the cultural nuances in marketing to the people of Myanmar. But it is not necessarily something the newcomers have adopted.

“I do think some companies have gone into Myanmar without showing respect to local nuance,” adds Olds “and as a result have lost a lot of money. We have seen, for example, some brands trying to impose stridently individualistic, almost grungy, street-teen values in the presumption that these will resonate as they might elsewhere in the world: they don't.

“Like any country, Myanmar has its own distinctive culture, and we have a large team of Myanmar nationals as well as experienced expats to respond to this. Rather than a challenge, we see it as an opportunity to be relevant and respectful. To take just one example, knocking copy or the kind of aggressive comparative advertising which might appeal in the north Atlantic would be seen as plain bad manners in Myanmar.”

In looking ahead to developing agencies in Myanmar, Dr Kyawt believes there is a deficit of local experts needed to drive the industry forward. “There are not many local experts in the advertising industry, and the creatives don’t necessarily know how to deliver a brand. We need media experts who can report to international clients and we are training locals, but it is difficult for them to learn the tech.”

Despite the huge progression made in business since the sanctions were lifted, local culture in Myanmar is yet to catch up with the western working day – “It is easier to train locals in client service, but unfortunately work ethics are not well respected and people don’t always conform to the hours or regime.” Says Dr Kyawt. “So as a result, agencies are manned with expats who are not known to the market and find the difference in approach very stressful. This can sadly mean that some only stay for the money and don’t enjoy working in this market. It will take another five years to stabilise the market with proper rules and procedures introduced on both sides – government and industry.”

But regardless of the many hurdles, agencies and brands shouldn’t be deterred from reaching the Burmese people, even if it takes a little patience. “It's going to be a long road with a lot of bumps along the way,” adds Olds, “but one worth travelling for those who have a long term perspective and who are tolerant to short term financial volatility. 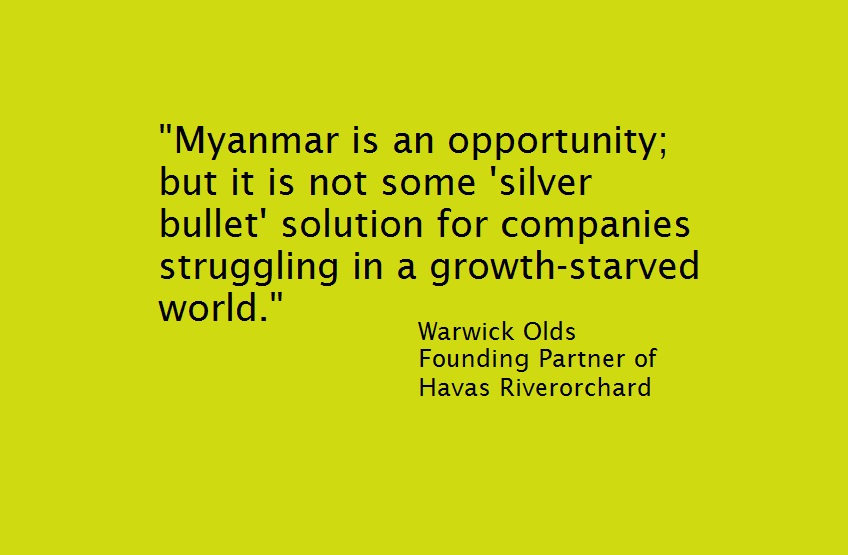 “My advice is to go in with your eyes open. Myanmar is an opportunity; but it is not some 'silver bullet' solution for companies struggling in a growth-starved world. Myanmar still faces many challenges in infrastructure development, for example with banking, electricity, and ports, and is not for people looking to make a quick buck. It needs time, commitment and consideration.”

But when it comes to new agencies connecting with local brands, his recommendation is simple – “Just give them a call!”