If you read one thing from Cannes 2016, make it Matt Lambert’s stirring appeal for inclusion, diversity, personal integrity and creative authenticity 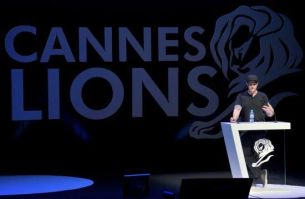 In a week that’s all about big ideas and bombastic campaigns and world-changing creativity, it can be easy to overlook the personal stories. But that’s where you find the most visceral embodiment of creative revolution. As part of the Make Some Room seminar on inclusion and access, hosted by SapientNitro and Prettybird, director Matt Lambert took to the stage to share his own journey.

He is a filmmaker, photographer and visual artist whose work explores identity, relationships and sexuality. It also digs deeper to discuss how digital evolution effects those narratives… and his journey has taken him from compromise and burnout to true self-expression, integrity and creative rebirth. As a director in the States, his vision was rejected as ‘too idealistic’ and ‘too gay’ and he numbed himself by separating his personal creative goals from his commercial work. He eventually left for Berlin, where he rekindled his creative fire, built an audience who embraced what his work was saying and nurtured his vision. And now he’s re-entering the commercial music video spaces… on his own terms.

Below is a transcript of his speech, in which he shares his story and encourages creative businesses to make space for diverse voices.

To take action, head to MakeSomeRoom.org.

When I first started working in commercial spaces, I never allowed my work as an artist and my work in commercials to intersect. I was afraid to be me in fear of jeopardising my commercial career by being too ‘honest’.

I left NYC and moved to Berlin to take a break. Over five years later I'm slowly coming back to a commercial space but, this time, on my own terms.

I threw everything away to build a new life AND body of work. But these things were just a job and, well, things.

My experiences and relationships are, and were, the only things I really need to keep my work going.

It was a gamble, but it was also about a long game.

I could fail... but I also could build a career that I'd be happy with for life AND one that actually moved people.

I went against the advice of so many people I talked too.

They loved the work!

...but I’d be unmarketable.

There weren’t many places for the work I was making.

But it felt too felt right and the response was growing.

So, I started to create new spaces for the work with the help of supportive producers, editorial platforms, social media and physical events. People started to notice.

Although I first started making work as part of a selfish and autobiographical journey, I soon realised I was touching people.

I was engaging with my community. I was presenting an honest version of intimacy that was missing and trying to do so as authentically as I could.

I would get messages from young people who shared the effect the work had on their lives and coming to terms with themselves - and I still do.

It showed them worlds and characters that THEY could identify with and therefore felt less alone in the world. The work had now found its home and the work now belonged to them.

The day I said, ‘fuck it’ was the day I started making work that resonated with people.

We can be so, so jaded but honesty and vulnerability are often impenetrable forces.

I’m learning how to put the work and my characters first and my humility second. It’s a learning process and I’m still coming to terms with public vulnerability. But, when you’re true to yourself, people will have a stronger visceral reaction to your work. Your work will have more integrity and so will you.

In the last few years, I’ve been very selective with the clients I’ve collaborated with. I’ve been doing a lot of music videos again lately and primarily work with LGBT artists. At the moment there’s such a shortage of storytellers available who can tell their stories with the sensitivity and authentic nuance of now.

The brands I now work with know what I'm about. I don’t have to split my persona and if someone can’t wrap their head around the work I do, then we don’t need to work together and that’s OK. Luckily I’m managing to find some that get it.

I tend to do a lot of my own PR and often it comes down to micromanaging the language in which people use talk about my work.

Is it "too GAY"? Or is it so intimate it makes you feel uncomfortable?

Is it about "fucking and naked bodies" or is it actually about love and relationships.

Is it “too dark”? Or do you just not have the capacity to understand that not all intimacy looks like yours.

It's such an easy move to minimise my characters and the worlds I create.

Although the LGBT community has taken massive steps forward, things like what happened in Orlando remind us how far we have to come.

The internalised homophobia that young people experience daily is toxic and can be deadly. The mirror of themselves is what the media offers up.

I feel it's my moral and social obligation to portray the reality of my past and present AND the reality of the next generation of my global community in the most humanist way possible.

This reality is valid and not a novelty.

In media we are hyper-sexualised or de-sexualised.

As characters, we are “tormented by our sexuality” or “defined” by it. We are rarely depicted how we are.

Evolving our verbal and visual language is the only way to move forward in conversations surround race, gender and sexuality. The people in this room have that power.

How can these stories be told when the story tellers are minimised, stereotyped or feel too alienated to be in the room?

It needs to start from the top. Our teams need to be more diverse. The work, stories and characters will naturally become so as well.

There’s someone to support your work, you just need to find them. Don't bend your view to fit the company you end up at. Find your market. Find your team. Find your cheerleaders.

Build your community and your audience.

The tools available now make this so easy as long as you have something to say that people need to hear.

I know my story is not your story.

And I don’t expect everyone to quit their jobs and move to Berlin to be an idealist queer artist!

Think about how strong inclusion can make a unit.

And take a small portion of your creative energy and use it to say something about something you care about and something that needs changing.

Matt Lambert is a director repped by Prettybird in the UK and US, and Iconoclast in Europe. This year at Cannes Lions, he was featured in the Saatchi & Saatchi New Directors' Showcase for his music promo for Mykki Blanco’s ‘High School Never Ends’. Check that and two other pieces of his work out below.