My First Month in Germany with Little Black Book 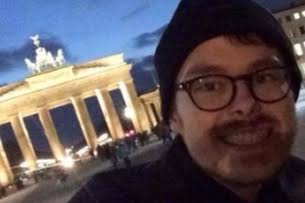 I’ve been in Berlin now for what’s been a frighteningly quick month, and while my wurst consumption is probably (definitely) still way too high, it feels more like home every day.

My move to this brilliant city was a bit of a match made in heaven. For starters, Germany has always been a strong market for Little Black Book. In our country traffic ratings it jumps between third and fourth, behind the UK and USA which sit first and second. But there was still so much more we could and wanted to be doing here. Our aim at LBB is to give local markets global fame, and so here I am in Germany, with my sights set on doing exactly that for the local market.

It just so happens that Berlin is also a city I very much love. The two situations pretty much went hand in hand.

Since getting here I’ve been truly humbled by how welcoming the entire industry has been to both me and LBB. Each conversation, be it face-to-face or on the phone, has amassed to a multitude of exciting opportunities and new friendships. The German industry is hungry for the global recognition it deserves and I’m excited to embark on that journey with it.

But, in reality, I’ve covered only a mere pinprick of this vast advertising market. There are still many, many more of you that I want to meet and hear from - and I promise we’ll eventually get the opportunity to hook up. So far my German adventure has been contained to Berlin, but people of Hamburg, Düsseldorf, Munich, Cologne and Frankfurt, fear not! I’ll be in your ‘hood very soon and knocking on your doors for a cuppa. There’s also the ADC Festival in Hamburg next month and I hope to put many faces to names there.

In addition to the uniquely sprawling German advertising landscape, the country boasts, in Berlin, one of the most exciting startup scenes in the world - ‘Silicon Allee’, as it’s been dubbed, eclipsed London’s Silicon Roundabout in 2014 in venture capital investments.

As the lines of what ‘advertising’ really is continue to blur, and its involvement in tech continues to build, it’s more and more important for our industry to be in touch with these guys. I’ve always felt that startups wear the hats of both a brand and a creative company, and I can’t wait to properly immerse myself in that scene here. Keep your eyes peeled on LBB for more about that in the near future.

In the meantime, if you’ve got a killer story idea or just want to hear more of what’s what with LBB, please do drop me a line on addison@lbbonline.com