Musician Redfoo Gets His Summer Groove On with Malibu 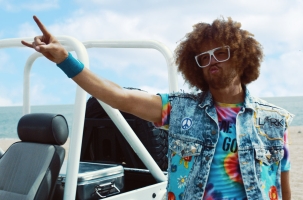 Malibu, the Caribbean rum with coconut flavour owned by Pernod Ricard, has signed Redfoo, formally of the electro-pop duo LMFAO, as a brand ambassador during the 2015 summer period.

The partnership sees Redfoo use the lyric “Got My Malibu With a View” on the track ‘Where The Sun Goes’. The song is the title track on Redfoo’s upcoming album, ‘Where the Sun Goes’, set for release later this year.

Redfoo’s lyric refers to drinking Malibu in the perfect summer setting, and product placement appears in the music video for the track. The music video was world premiered on RollingStone.com yesterday and launches today (5th August) on Redfoo’s YouTube channel..

The collaboration is part of a unique influencer strategy for Malibu, to put the brand at the heart of the conversation around summer. As part of the agreement, Malibu has usage rights for the track within key digital channels. There will be social media activation around the track focussing on the line ‘Malibu With A View’. Influencers across Vine, Instagram and Twitter will build buzz around Redfoo’s Malibu lyric.

The social activity is based on the observation that people are increasingly taking pictures of their drinks in summertime settings. The brand is aiming to leverage this and turn the activity into a major social media event.

The partnership with Redfoo complements the ‘Best Summer Ever Project’, Malibu’s current global marketing campaign. The ‘Best Summer Ever Project’ follows four young, creative YouTubers as they travel the world together, uncovering the ingredients that go into the perfect summer. These fun-loving explorers will tour Europe and the US, throwing themselves into experiences with the aim of offering their fans real and inspiring pieces of advice. Redfoo will feature in the content series and also provide additional film content through performances and interviews. The artist will also create an hour-long bespoke summer mix for the brand, as part of the Malibu Mixcloud series.

AnalogFolk is responsible for the creative activation and has a strategic partnership with Malibu around the campaign development.

Sina Neubrandt, Global Marketing Manger of Content at Malibu, said: ‘Our ambition is for Malibu to become the most talked about spirit brand during the summer. This unique partnership with Redfoo – who is well known for his exuberant attitude – is a fantastic fit for the Malibu brand and builds upon the Best Summer Ever Project, as we aim to create a positive social phenomenon this summer.’

Neil Bennett, a Strategy Director at AnalogFolk, added: ‘We want to make Malibu a global icon of summer, and so with this partnership we've built a unique influencer led strategy that we think will engage with the brand's target audience in a truly authentic way.’