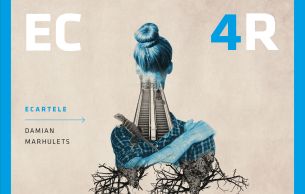 Damian Marhulets introduces his new track 'Less Than A Year' ahead of his new album release ECARTELE.

Combining his concert music roots with his sound-design skills and years of experience as an electronic music producer, he discards conventional musical clichés in order to develop an original music language.

ECARTELE is written as a soundtrack for an imaginary feature film about the meeting between two of the major thinkers of the 20th century – the Nobel Prize winning physicist Wolfgang Pauli and the psychoanalyst, Carl Gustav Jung. The composer relates the story of this friendship in musical terms, and explores the grey area between physics and the psychology of the unconscious.

In order to achieve a tonal range that is both modern and cinematographic,Damian Marhulets uses electronic sounds as well as working with the string players of the famous Szymanowski Quartet and Marina Baranova on prepared piano.

Listen to “Less Than A Year” below.