Music and Football: It's Coming Home

Trends and Insight 423 Add to collection 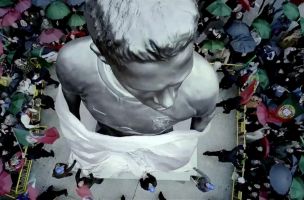 Fold7’s Rod Elms waits with Grand Central Recording Studios sound designer Munzie Thind for client approval on the final mix of Carlsberg’s Euro 2016 launch film for their summer ‘substitutions’ campaign – a patriotic and uplifting spot to rally the country’s fans. With time ticking and the deadline looming, thoughts turned to the beautiful game and it's associated beautiful sounds …

Munzie> Music and football. A match (sorry) made in heaven. Look at the evidence, Hoddle & Waddle, Skinner & Baddiel, John Barnes’ rap skills and Chas & Dave singing about Ossie’s knees going all trembly on the way to Wembley. I defy you not to listen to ‘Stop Crying Your Heart Out’ without thinking of England getting the plane home from another World Cup, with a tear in your eye.

Rod> Exactly. They sit comfortably together like Gazza’s testicles in Vinnie Jones’ hand and there is no better example of this than in ads. Over the years there have been some truly memorable and iconic ads featuring football that have all had some stand out music tracks that make them truly iconic pieces of TV advertising history.

Munzie> But who is the Daddy?

Rod> If anyone deserves to have a whole host of stars above their badge then it has to be Nike.

From the low key UK only ads featuring ‘Can I Kick It’ and ‘Parklife’ through to the globe spanning epic productions that used ‘A Little Less Conversation’ and Write the Future’s ‘Hocus Pocus’ as it’s soundtrack. Nike, and its agencies, have the enviable skill to pick the perfect song to accompany their ads. Bastards. 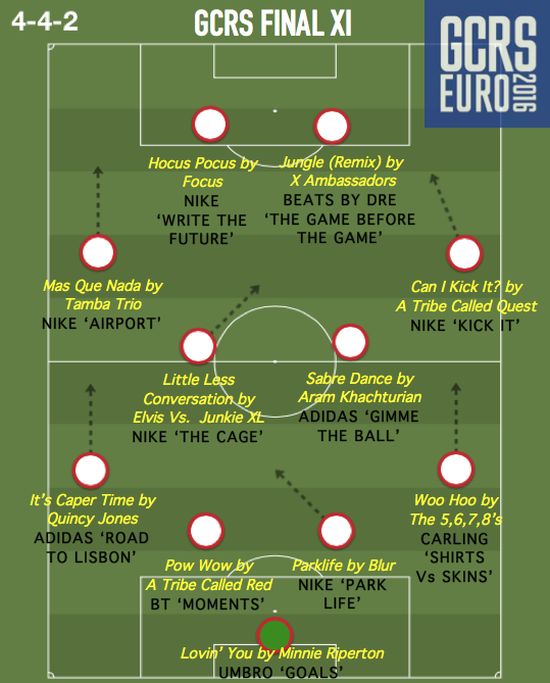 Munzie: But what about the Umbro film? The way they used the Minnie Riperton track draws you in, a love song to the beautiful game and the way it captures people’s imagination. It’s not a glossy, big budget piece but its simplicity lets the viewer interpret the message for themselves. It makes me grin!

Rod: It’s not just global sportswear brands with more money than Sheikh Mansour who know what they’re doing when it comes to picking the perfect track for their football ads. Beats used the track ‘Jungle’ by Jay Z to great effect as the soundtrack to their five minute epic, ‘The game before the game’ film featuring an array of global superstars, although I’m pretty sure that Dr Dre has some pretty good connections when it comes to procuring a decent track.

Beer brands generally go hand in hand with football, as that’s what you do when you watch it. Standard.

Munzie: True. The brilliant ‘Shirt v Skins’ spot for Carling that I worked on used a little known track from Kill Bill called ‘Woo Hoo’ by the 5,6,7,8’s which perfectly captured the personality of the film and was annoyingly catchy. So much so, that the fans were chanting it at the grounds that season.

Munzie: The BT Moments film is a great example of the music – Pow Wow by A Tribe Called Red – working in a more obvious way, that drives the piece because of its tribal nuances. It gives the film energy and it stirred up emotions amongst the fans – life or death! Whether it be joy or absolute devastation, it kicked off a real conversation among fans. The music couldn’t have been more perfect for this.

Rod: That is the key to great soundtracks, they should add something to the film and never overpower or irritate the life out of you.

You don’t always need a super sexy track either to sell your wares just look at our Carlsberg Euro 2016 piece. The royalty free track (shock horror) you used perfectly complemented the slow build of the narrative and to stir up some much needed patriotism in the armchair/pub chair viewer.

Rod: Let’s hope, in the coming weeks, the BBC doesn’t wheel out the Oasis track too soon.

*High fives all round. Still no sign of the client.*