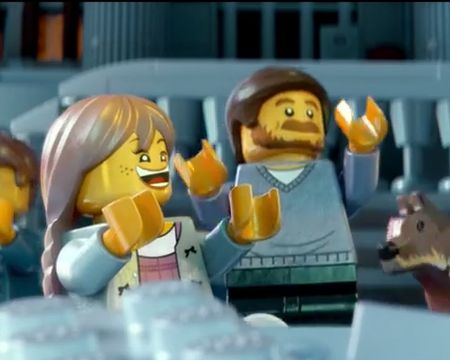 Sky unveils its most ambitious Christmas TV advert to date, inviting families to Step into the Adventure with Sky Movies this festive season.

The advert, which will premiere on ITV during The X Factor on Saturday 8th November, takes viewers on a magical movie journey following a family and their dog Chester. Viewers will be transported through some of the famous movie worlds that will join Sky Movies this December: Disney’s Frozen, The LEGO® Movie, The Amazing Spider-Man 2 and Disney’s Muppets Most Wanted.

The adventurous advert follows the unsuspecting family as they are whisked off on a magical movie tour. Along the way, they transform into a variety of animated versions of themselves, which have been painstakingly created by filmmakers from across the world.

From taking a sleigh-ride through the icy Arendelle landscape from Frozen, to popping-up centre-stage in the middle of the Muppets theatre, the ad follows the family as they are dropped directly into the action and adventure. Throughout their journey, they also come face-to-face with much-loved film characters, including Kermit the Frog (Muppets Most Wanted), Spiderman (The Amazing Spider-Man 2), Emmet (The LEGO® Movie) and Olaf (Frozen).

Bringing the films to life even further, Sky is also offering families and movie fans the chance to create their own adventure. From early December, visitors to SkyMovies.com will be able to create a personalised Christmas image that they can share online and send to loved ones, featuring themselves, family and friends with characters from the four movies featured in the advert.

It took a team of over 130 artists, animators, crew, performers and producers to bring the family to life, working in film studios across the world from California, to New York and London to Sydney. Each animation and bespoke film scene required a huge number of man-hours, with the crew clocking-up over 5,500 hours in total.

Ian Lewis, Director, Sky Movies commented: “Enjoying movies with the family is a big part of Christmas so we decided to bring some of them to life this year. We are very proud that Disney, Warner Bros and Sony have allowed us to work with their creative talent to create special scenes with these iconic characters for our new Christmas ad campaign. It reflects the strength of the partnership we have built with them, working together over many years. Sky Movies is the only movies subscription service where you will be able to enjoy these incredible family adventures whenever and wherever you want this Christmas.”

Ivan Bird, Director, commented: “Being able to step directly into magical film worlds and meet our favorite movie characters, is something everyone dreams of experiencing.  Working closely with filmmakers from across the globe to create our very own characters and brand new movie scenes, was an adventure in itself. We worked with animators from Australia to America, to bring our family to life in all their different fantasy film forms.”

The four films featured in the advert will premiere on Sky Movies throughout the Christmas period on the following dates and will be available On Demand and on Sky Go:

Familiar characters from each Sky Movies premiere will also appear on outdoor, press, digital and mobile advertising, ensuring a touch of Sky adventure reaches the whole of UK this festive season.