SVP, Account Director at MullenLowe US Tony Labriola presents 'Eat This Panel: If You Dare' 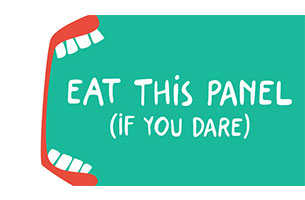 MullenLowe U.S. SVP, Account Director Tony Labriola curated a panel during SXSW Interactive to examine the digitally rooted and constantly morphing food dialogue happening amongst consumers and nutrition ‘experts’ worldwide. Since the dawn of civilization, what we eat has been as much about science as speculation, myth and mysticism – from the apple in the garden to modern-day Neanderthals eating like our cave-man ancestors: food fact has become malleable. The internet, and in particular social media, has only served to compound the problem.

To address this issue head-on, Labriola curated an expert panel at one of the world’s largest creative and interactive forums with James Hamblin, MD The Atlantic Monthly, Yvette d’Entremont, The SciBabe, and Alan Levinovitz, PhD James Madison University, to bring clarity and common sense to how the opinions and practices of anyone with access to the internet are influenced when it comes to the discourse about the many aspects and realities of food in our lives.

“Given the volume of food and nutrition information available to people today, I wanted to assemble a group of experts who take on the fads and separate fact from fiction through three different lenses: bringing together science, pop culture, and the foundation of belief systems – religion – too add a little bit of spice to this important and enlightening conversation," said Tony Labriola, SVP, Account Director, MullenLowe U.S.

Labriola’s panel questioned the source of information as the potential culprit to widespread attitudes toward food for some of the most popularized trends, diets, and beliefs. He also highlighted the role of media and social media in the equation to demonstrate the power contemporary communications play when it comes to everyday decision making. The basic laws of healthful eating are simple – eat in moderation, get some exercise – yet we’ve made something so simple extremely complex; anyone who eats (which means everyone) has encountered a food trend or fad that left them confused or wondering what’s best or who to believe.

“Effective, preventive medicine has to begin with understanding where people are coming from – why everyone believes what they believe. It can’t just be about bombarding people with facts and directives.” said James Hamblin, MD, The Atlantic Monthly

There is an echo-chamber effect happening with algorithmic delivery of content tailored to our ‘liking’ in addition to the ways in which our brains categorize food groups – from pixie sticks to kale and everything in between, people want to think of things as good or bad which results in a reductive approach to nutrition.

From historic tales to modern day myths, it was a clear consensus that in order to find healthy and harmonious living, the truths about food and nutrition need to effectively resonate. The fad diet peddlers need to be curtailed and positive nutrition messages need to be understandable in our vernacular, as opposed to the scientific language. It’s a tall order for a culture where hype and hyperbole grab the headlines and pixels.