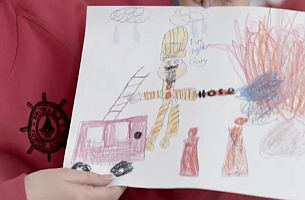 Exactly one week on from International Women’s Day a new film reveals the reality of gender stereotyping amongst primary school children. The two minute film was shot on location at Whitstable Junior School in Kent with 20 children between the ages of 5 and 7.

When asked to draw a firefighter, surgeon and a fighter pilot, 61 pictures were drawn of men and only 5 were female.

The ‘Redraw The Balance’ video provocatively captures how, early on in their education, children already define career opportunities as male and female.

The pro-bono film has been made for the Inspiring the Future charity by leading creative agency MullenLowe London. The charity is urging people to share with friends and colleagues and raise awareness of how much needs to be done to tackle gender stereotyping.

To make a difference volunteers can sign up here: www.inspiringthefuture.org and pledge just one hour to chat to children about their career.

Russell Hobby, general secretary of the National Association of Head Teachers (NAHT), explains: “Inspiring the Future’s primary programme is transforming the way children connect their learning in primary school with the many opportunities that lie ahead. The project opens up the world of work to the children – right at the age where they are beginning to develop their aspirations and ambitions. It helps to break down gender stereotypes and preconceptions, improving life chances, especially for those living in areas of deprivation. I would wholeheartedly encourage every employer to support this scheme by becoming volunteers and every school to take advantage by joining us on this exciting journey.”

In the film ‘Redraw The Balance’ we meet three female ‘teachers’ asking a typical classroom of children to draw people with exciting and aspirational careers: a firefighter, a surgeon, and a fighter pilot. The children draw 66 pictures in total with only 5 depicting women. They are asked if they would like to meet real-life versions of these drawings. The 'teachers' return to the classroom in their uniforms, revealing themselves not to be teachers, but Ms Tamzin Cuming, Consultant Colorectal Surgeon in London, and member of the Women in Surgery (WinS) group at the Royal College of Surgeons, firefighter Lucy of the London Fire Brigade, and Lauren, an active RAF pilot.

Richard Denney, ECD of MullenLowe London, comments: “It’s our responsibility as working professionals, as well as educators, to encourage and inspire young minds that the majority of jobs and roles today are available for women, and not just men. These young minds are our future.”

The film was directed by Matt Huntley for Burger Films and is supported by three further pieces of content, each giving an insight into the three professional women’s experiences in doing what many perceive as a man’s job, the barriers they overcame and the challenges they still face.

MullenLowe London is a proud supporter of the Inspiring The Future initiative and continues to work on genuinely contributing to redressing gender inequality in the workplace through HR initiatives and collaboration with partners such as She’s Back.