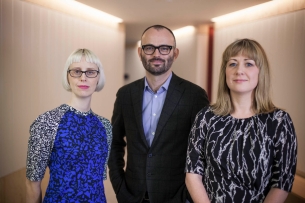 MullenLowe London has started the year with a series of leadership promotions as Charlie Hurrell, previously Head of Account Management, is promoted to Managing Director. Charlie will report into CEO Jamie Elliott and the move is effective immediately.

Jamie Elliott, CEO MullenLowe London explains: “We’re set-up to smash specialisms together to get our clients’ brands an unfair share of attention.  Charlie and Kirsteen are strong creative leaders with the unbound spirit we need in these key positions to drive us successfully on."

Charlie was previously Client Services Director at Glue Isobar before joining DLKW Lowe (now MullenLowe London) in 2012 as Head of Account Management. She has since led the largest department in the agency from strength to strength - supporting record new business wins and focus on the creative product.

Charlie has also championed the industry's working mothers, both internally at the agency and externally, through her commitment to setting a realistic role model example and promoting efforts of organisations such as She's Back.

The Managing Director role was previously held by Jamie Elliott before his promotion to CEO in June 2015. Since then the agency has relocated to its new home in Old Street, and rebranded as MullenLowe London.