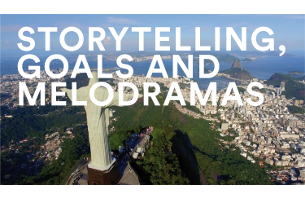 An informative series about Latin America would be remiss without discussing the undue influence of Latin America’s impact on the entertainment industry and the world. In this week’s episode of LATIN TALKS, the famed soap operas commonly known as “novelas” are seen as more than just love stories; they weave a common thread that connects each member of the region into stories that are considered meaningful, have purpose, and create a better understanding of the larger culture for the millions of people that tune in. Furthermore, the sport of football is discussed with our panel of participants, as the sport is practically considered as religion within the region. How do Latin Americans translate these passions into both verifiable resources and outlets for their audiences?

“In the case of Latin America, where the democratic process is uneven and full of interruptions, where some countries have a legacy of coup d’états, the melodrama is crucial in distinguishing between good and evil. It’s impossible to analyse the deep, vast experience of the melodrama in Latin America if we don’t keep in mind that it is a pedagogical mechanism that helps us understand the chaos we’re experiencing from the perspective of values, government, and the way people are educated in this continent.” – José Carvalho, Screenwriter, Play-Writing Professor, Brazil

Within the realm of entertainment, new formats and genres may be deemed ephemeral, however, the Latin American “soaps” are considered the benchmark for creating a known stand-alone brand within the cultural zeitgeist that are capable of both creating and influencing multiple facets of life. While widely recognised as charming yet provocative, soap operas are influencing brands to create new ways of targeting consumers. Are they creating a new “golden age of television”?

“The interesting thing about the soap operas is that they show the particularities of Latin American life. What the brands could do is export this. Especially the regional brands, which should show a little slice of life from Colombia, or Brazil or Chile, and communicate it far and wide and take it up as a banner.” – Pancho Cassis, LOLA MullenLowe, Spain

This episode of LATIN TALKS is an entertaining look into some of Latin America’s most cherished pastimes.