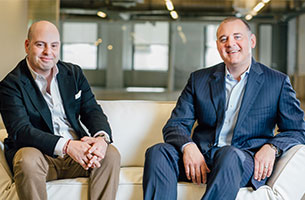 MullenLowe Group today announced the appointment of James Fox as Global Chief Strategy Officer. Fox officially took up his new role on May 1st and will be based in the new MullenLowe offices in New York. Fox has spent the last 6 years as CEO at Red Peak Branding, building one of the fastest growing branding agencies in the United States, with offices in New York, Taipei, London and LA, and a client roster including Intel, MetLife, Pfizer, UBS, Morgan Stanley, Hard Rock and E*Trade. Prior to his leadership of Red Peak, Fox held senior strategy roles at some of the top advertising agencies around the globe, including Fallon, BBDO and TAXI.

Alex Leikikh, Global CEO of MullenLowe Group commented, “James has the global expertise for the role, he is a clear strategic thinker, and has the leadership experience of running a micronetwork as a CEO. Most importantly, I’ve worked with him previously at Fallon, and I trust him implicitly to bring to bear the extraordinary strategic talent we have across the network and focus it on creating new solutions for our clients through our hyperbundled offering”.

Fox joins the network at an exciting time, following the formation of the MullenLowe Group in May of last year, and the unveiling of the new brand positioning as a global creative boutique with a challenger approach delivered through a hyperbundled operating model. Through their challenger thinking MullenLowe Group has delivered some of the most effective, high profile communications ideas in the global marketplace; the network has topped the Effie Index, in terms of points per dollar revenue, for five consecutive years, won the US Grand Effie for effectiveness for American Greetings, and been named the number one Creative Agency in the World two years in a row by WARC 100, an annual ranking of the world’s best performance in effectiveness and strategy competitions.

“MullenLowe Group is doing something very unique for a global agency network” notes Fox. “Their hyperbundled offering of products and services are exactly what modern brand owners are crying out for. In a hyperfragmented marketplace, only agencies that can bring together all the strands of marketing services and media will thrive. MullenLowe is predicated on this simple idea and unlike many other networks is actually structured to make this a reality”.

Fox started his career at St Luke’s in London working on award winning work for IKEA, Emirates and Clarks shoes. He then made the move to the US to work at Fallon Minneapolis where he ran global strategy for United Airlines, winning in a single year two Gold Effies, one Silver Effie and an Emmy for Outstanding Commercial. From Fallon, James moved to BBH where he ran the strategy for Levi’s and British Airways in the US and then onto TAXI where he was named Chief Strategy Officer. During his tenure at TAXI they established a thriving NY office, opened 4 more offices globally, and Strategy Magazine voted TAXI agency of the year twice in a row under James’ leadership. From TAXI, Fox joined BBDO where he led the billion dollar rebranding for AT&T’s wired and wireless business globally.

Fox added: “Having worked with Alex at Fallon on the United Airlines account, I know just how hard he fights for the very best work for clients. He is a very persuasive guy and is passionate about delivering business results through the highest levels of creative output. I am excited to be working with him again”.

Fox was voted Innovator of the Year by Internationalist magazine in 2014 and was named a Future 50 CEO by Smart CEO magazine in 2015 and 2016.  He holds a BSc in Psychology from the University of Leeds, and Masters in Industrial Psychology from the London School of Economics. He has been a board member of the charity Free Arts, which provides free art education and mentoring to children throughout New York. He lives with his wife and three year old son in the Upper East Side of Manhattan.