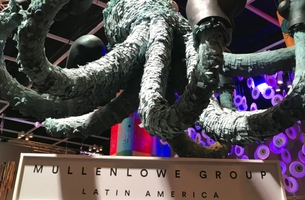 The complete award breakdown is as follows:

x1 Bronze – Colsubsidio Libaries “In the Right Hands” in Print

It surprised everyone when he went back to a program called “God, the Universe and Everything Else” from 1988 with no less than Carl Sagan, Stephen Hawking and Arthur C Clarke, who were discussing the concept of time. It’s one that is difficult for a majority of people to understand. But Puebla did this to demonstrate the fact that “not being exposed to something is what prevents us from understanding it.” He then related that to how advertising people are facing the rapidly changing world of today.

His recommendation is that everyone should accept the way things are today, not try to fight them, accept that things are not black and white any more, that we all live in the grey area, and that we should expose ourselves to this rather unknown context, be curious, study, learn and learn how to go on the best way.

And for a perfect closure at this year’s 20th anniversary of El Ojo de Iberoamérica in Buenos Aires, MullenLowe Group Iberoamérica – a longstanding sponsor of the Festival – organised a real birthday party celebration with a huge piñata, featuring the agency’s octopus logo.

Right before the final awards ceremony, in a fun and laid back celebration, Francisco Samper, Regional Director for MullenLowe Group Latin America, congratulated Santiago Keller, Director of El Ojo de Iberoamérica, and all the Festival’s team for these outstanding 20 years of supporting the advertising and marketing industry of Iberoamérica and for being such an important showcase for the industry’s work even beyond the borders of the region. As in all birthday parties, the piñata was broken and a cascade of sweets, paper ribbons and confetti fell from it for the delight of all the participants.