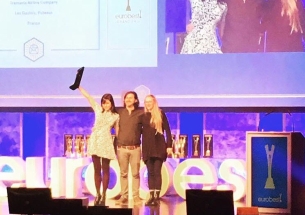 The Mullen Lowe Group network took home a total of fifteen awards at the Eurobest award ceremony held on Thursday evening, December 3rd in Antwerp, Belgium. The agency was awarded seven Gold, three Silver, and five Bronze prizes. The Eurobest festival is one of the world’s premiere celebrations of European creativity, bringing together various cultures and communities of the European continent to inspire one another, debate and compete in the latest in communications techniques. Mullen Lowe Group’s German agency, GGH Lowe and Spanish agency, LOLA, were both winners.

GGH Lowe saw an exceptional performance, being awarded an impressive twelve prizes for the ‘Nazis Against Nazis’ campaign.

The widely acclaimed ‘Nazis Against Nazis’ work from GGH Lowe in collaboration with Grabarz & Partner, turned a Neo-Nazi demonstration into a charity walk. The work has been recognized by multiple top international awards shows and was the fourth most awarded campaign at the Cannes International Festival of Creativity in 2015.  The work was awarded the following:

- SILVER: Media: Use of Events & Stunts

Jose Miguel Sokoloff, Global President of Mullen Lowe Group Creative Council has commented on the work: “It’s one of the most brilliant ways to solve a problem without using force”.

LOLA, Mullen Lowe Group’s Spanish agency, produced ‘Anagram Lovers’ for Scrabble which tells the charming love story about a man and a woman whose lives are connected by anagrams. LOLA created the digital spot, which appeared on Mattel’s website and YouTube channel and went on to win a Silver Lion at the 2015 Cannes Lions Festival. The work was awarded the following:

In addition to Mullen Lowe Group’s campaign recognition, LOLA’s Chief Creative Officer, Chacho Puebla, was a Direct Judge at the festival. Puebla is a widely recognized figure in the global advertising industry, leading LOLA to Agency of the Year at the 2014 El Sol festival and the most awarded Mullen Lowe Group agency at the 2014 Cannes Lions Festival. Chacho says, “I am a maker because I believe that you need to break stuff if you want to go further. We as human beings need to move forward not just by saying, by doing”.  As a judge for the ‘Direct’ category, Chacho evaluated work that incorporated direct response strategies, attributing effect on behavior and obtained a measurable response.

The winning work can be viewed here: