Awards and Events 195 Add to collection 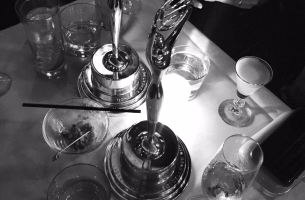 The campaign transformed a Neo-Nazi demonstration into an involuntary charity walk. With every step the Neo-Nazis took they unwittingly made a stand against right-wing extremism – €10  per step was donated to Exit Deutschland, a charitable organization that helps people leave neo-Nazi groups. GGH Lowe worked on the campaign in collaboration with fellow German  agency Grabarz & Partner.

“If you use force, you never change anything. You have to convince someone without force, by being intelligent, by being clever. ‘Nazis against Nazis’ is an example of an initiative that tries to address an issue without being forceful,”  comments Jose Miguel Sokoloff, Global President of Mullen Lowe Group Creative Council.

Benedikt Holtappels, CEO of GGH Lowe comments: “I am extremely proud of the ‘Nazis against Nazis’ campaign. It has not only generated huge creative success, but has proved to be extremely effective in doing what great advertising should do: Drive social change”.

‘Nazis Against Nazis’ was awarded the following Clio awards this year:

The Clios success builds on numerous awards wins, with ‘Nazis Against Nazis’ proving to be one of the world’s most awarded campaigns of 2015:

· Fourth most awarded campaign at the Cannes International Festival of Creativity

· Four Gold Pencils and one Silver Pencil at The One Show

· Five Pencils at the D&AD Awards, including a Yellow Pencil, and a White Pencil (which recognizes sustainable and ethical advertising and design)

At the Clios, Mullen Lowe Group was also awarded for the work from their Spanish agency, LOLA, which helped independent football and life style magazine Libero explain life through football. The campaign propelled an unknown magazine into the forefront of Spain’s pop culture with ‘If They Explain it With Football, You Get It’.  The wining spot, ‘Ab Machine’, was part of the ﬁrst ever advertising campaign for Libero, and went viral upon its launch.

‘If They Explain it With Football, You Get It’ was awarded the following Clio award this year:

· Silver – Commercials (between 30 second and 60 seconds)

DLKW Lowe also won at the Clios this year for the Domestos, ‘Holidays Over Selﬁe’ campaign. People tend to respond differently to the visualization of germs, so the campaign created print executions with the right balance between humor and charm without compromising the icky truth of germs.

‘Holidays Over Selﬁe’ was awarded the following Clio award this year: