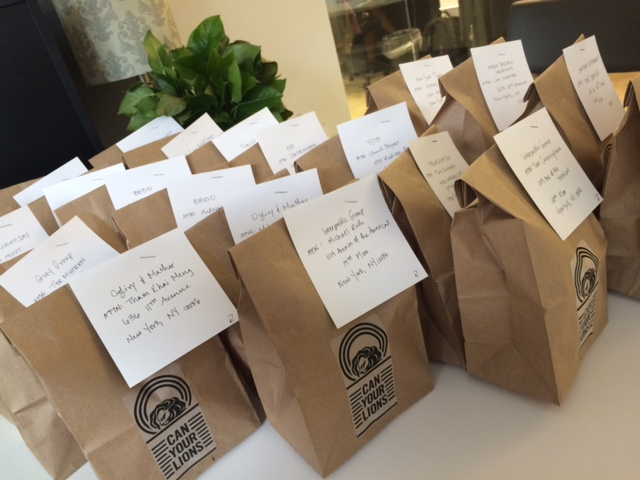 On Friday October 16th, Mullen Lowe Group delivered the iconic World Food Programme red cups, along with emergency rescue food items, to key influencers in the advertising industry in both New York City and London. The activation was set in place to recognize and instill the importance of October 16th being World Food Day in conjunction with the global network’s ‘Can Your Lions’ fundraising effort.

World Food Day is an internationally observed day in the year to acknowledge and attempt to eradicate hunger issues that exist all over the world. The red cups, which have become a symbol of the fight against hunger, are used by the WFP to serve food to those in need.  Mullen Lowe Group sent the red cups to advertising industry leaders, which included a note encouraging them to support the ‘Can Your Lions’ effort, to drive awareness and engage these key stakeholders for the 2016 ‘Can Your Lions’ campaign effort.

Last June, Mullen Lowe Group created ‘Can Your Lions’ days before the 2015 Cannes Lions International Festival of Creativity as a means to bring the ad community together and give back to those in need. Mullen Lowe Group pledged to donate the monetary value of all the 32 Lions statues they won at the festival to the WFP, and invited other agencies to join them in the pledge. With the help of McCann and Marcel, over $100,000 dollars was raised which translated to over 200,000 days worth of food for the earthquake ravaged people of Nepal.

“The ‘Can Your Lions’ program is helping the World Food Programme deliver vital nutrition—and hope—to hundreds of families still recovering from the earthquake in Nepal," said Rick Leach, President and CEO of World Food Programme USA. "The support has given us the opportunity to amplify the voices of those in need in Nepal long after the news coverage has faded. ‘Can Your Lions’ is helping to transform how creative minds in the U.S. are contributing to the global fight against hunger. Collectively, we can be the generation that makes hunger history."

Mullen Lowe Group seeks to amplify the success of 2015 and hopes to raise enough money to provide over 1 million days of food for those who need it most.  By putting a piece of reality in the hands of those being asked to pledge and support Can Your Lions in 2016, Mullen Lowe Group hopes to engage a greater portion of the international advertising community to enhance the lives of many more in need.