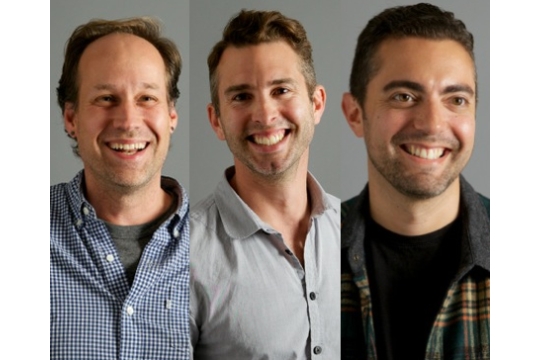 Strategic full-service advertising agency MUH-TAY-ZIK | HOF-FER today announced that three new creatives have joined the company. Multi-faceted Creative Director Todd Bois joins MUH-TAY-ZIK | HOF-FER following stints at Publicis Seattle and 180 Amsterdam. UK natives Adam Ledbury and Guy Lemberg have moved from their long-time adopted country of Australia, where they worked at DDB Sydney. There, they were perhaps best known for leading the charge behind McDonald’s officially changing its signage to the Aussie nickname “Macca’s” for a month, leading to an explosion in media and social impressions around the world.

“We’re excited and delighted to have three such talented creatives joining our team,” says John Matejczyk, Co-Founder and Executive Creative Director at MUH-TAY-ZIK | HOF-FER. “Todd brings an amazing breadth of skills and experience across digital and traditional storytelling, and is always ready and willing to get his hands dirty with every aspect of design, UX, technology, and strategy. As for Adam and Guy, we fell in love with their work right away -- especially their brilliant social media coup for McDonald’s – and knew as soon as we met them that they were a perfect fit for our culture.”

Todd Bois brings over 15 years of creative and technology experience to his new role at MUH-TAY-ZIK | HOF-FER, along with hard-earned, specialized expertise in digital and broadcast production. Prior to joining Publicis Seattle, Bois was Creative Director at 180 Amsterdam, where he was deeply involved in the creation and development of the extensive digital World Cup campaign for Adidas. While at 180 Amsterdam, Bois simultaneously initiated, developed, and extended Adidas’ social media presence to include more than 3 million fans. A Bay Area native, Bois has worked for full-service agencies and digital shops on both coasts of the United States, including BBH NY and San Francisco’s EVB – and for clients including AXE, Levi’s, Mini, Microsoft, Wrigley, Leapfrog, Kashi, and Adidas.

Adam Ledbury joins MUH-TAY-ZIK | HOF-FER as Senior Art Director following an extended run at DDB Sydney as Senior Art Director and Creative Group Head, where he met and worked with fellow British ex-patriot and Senior Copywriter Guy Lemberg. A native of Redditch, England, Ledbury majored in Product Design at Leicester University before moving to Gibraltar to work as a web designer. Before long, Ledbury moved on to Sydney, Australia to work as a Digital Producer for BBDO and Tribal.

Senior Copywriter Guy Lemberg also joins MUH-TAY-ZIK | HOF-FER from DDB Sydney, where he served as Senior Writer and Creative Group Head. Lemberg was born in northwest London and moved to Australia when he was 10 years old. He later studied Film Production at the University of Technology in Sydney before working at Love Communications, The Campaign Palace and DDB.