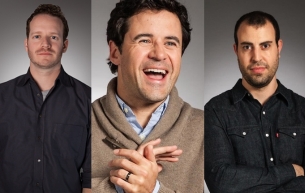 Integrated agency MUH-TAY-ZIK | HOF-FER is thrilled to announce the recent promotion of Josh Bogdan and Tony Zimney to creative directors, and the addition of Associate Creative Director, Nate Gagnon to the agency.

Josh began working with the agency in 2012 as a senior copywriter. His offbeat and clever storytelling style allowed him to create multi-platform campaigns for brands, including “It’s Your Town” for New Amsterdam Vodka and work with the Golden State Warriors. Tony joined the team in 2013 as an associate creative director. His insights and creative instincts were responsible for many viral campaigns, including a spot for the launch of Annie’s Homegrown Mac and Cheese Pizza.

Together this pair has grown to work with Netflix social, overseeing over 1000 pieces of creative a year, including “Fireplace Four Your Home” behind-the-scenes film and the juggernaut “Spoilers” site, which served over 9 million video views in it’s first week online. Josh and Tony also led the creative for Zoosk, relaunching the brand as a more substantive offering in the online-dating space, and turning in hits for the Golden State Warriors, Annie’s, and Google Chrome.

Nate brings to the agency his creative efforts and inventive thinking, as shown in projects like forgotify.com, featuring only songs that have never been played on Spotify.