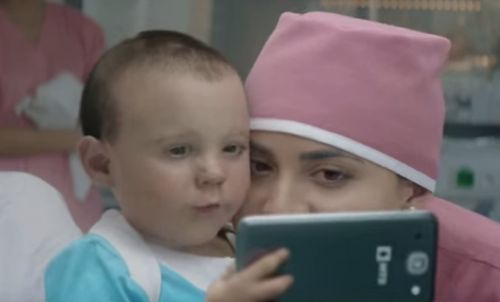 The Indian market spot for Russian telecoms giant MTS Telecom has been viewed on YouTube over 22 million times in 206 countries with its fresh take on the new generation of ‘digital natives’.

To a soundtrack of Diana Ross’ ‘I’m Coming Out’, the ad shows a new-born baby take charge of his own birth; first by using the Internet to research how to cut his own umbilical cord before then putting out word of his arrival on the web.  The spot has been directed by Guy Shelmerdine from Smuggler Films.

This week, ‘MTS Internet Baby’ surpassed Unilever’s ‘Lifebuoy Help a Child reach 5’ as the most viewed Indian advertising spot of all time and industry experts are forecasting it will perform strongly at this year’s Cannes Lions.

Creativeland Asia an independent ad agency conceptualized the ad to launch MTS’s new 3Gplus network in India and to demonstrate how the network appeals to users “Born for the Internet”. Since launch, the spot has stuck a real chord among bloggers and the international media, with discussion centering on how the work amusingly illustrates a new generation of ‘digital native’ consumers that view Internet use as their birth right:

This bold spot has provoked strong debate on the future of internet and technology after screening on Indian television but was actually originally launched in an innovative way – via torrent seed. Instead of using a conventional ad launch strategy, they set out to directly engage with India’s digital natives by seeding the spot as a BitTorent file amongst the country’s most download-hungry online communities. Web-savvy Indian fans of the ad then extensively shared it on social media and created a buzz days before the ad was officially launched on the brand’s official social channels. To date over 92,000 consumers have commented on the ad and shared it across Facebook, Twitter, Youtube, Tumblr and parody videos of the spot including one based on a reversed version of the ad ‘baby goes into momma’s stomach’ has also become a surprise hit.

Some Indian consumers even went as far as modifying the format of the film to create a mobile version of the MTS ‘the Internet Baby’, so they could share it with friends and family on social platforms like WhatsApp. The ad has taken on a life of its own and become emblematic of India’s highly aspirational generation of young web users who are “Born for the Internet”.