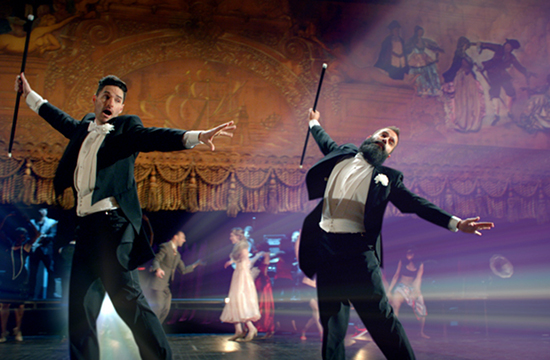 Filmed entirely in the historic Los Angeles Theater, the video for “Safe and Sound” – the chart-topping single off Capital Cities’ album A Tidal Wave of Mystery – opens with singers Ryan Merchant and Sebu Simonian kicking off a dance party with Fred Astaire-inspired moves that trigger an influx of other dancers and props from varying eras. Acclaimed choreographer Mandy Moore worked with over 70 dancers to create more than 40 unique dance sequences that each capture a precise historical time and style.

MTh Director Grady Hall originally envisioned a vibrant celebratory mash-up of dance styles from the past century for the video. “It’s the ultimate cross-time dance circle,” Hall explained. “Ballet versus B-boys, Funk versus Tap, ‘70s versus ‘80s. We wanted to cover every decade of dance, but I think we might need a sequel to do it.”

With help from Danny Lockwood, Capitol Music Group SVP, creative & video production, and the MTh team, Hall was able to achieve this vision. The video is infused with a sense of visual wizardry from start to finish with the help of art direction and visual effects by Mirada Studios. Hall and Mirada Creative Director Jonathan Wu guided a small team of compositors through more than 80 visual effects shots for the video, including head replacements, complex animations, stock footage integration, transformations, and retro-inspired effects ranging from black and white silent film influences to psychedelic visuals. The visual effects allow viewers to see the magic as each memory from the Los Angeles Theater is elegantly revealed and added to a growing dance party mash-up.