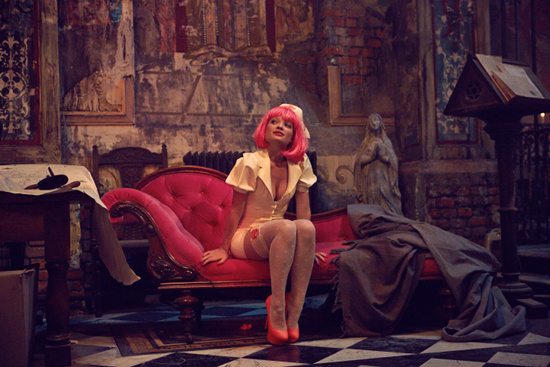 The film stars Christoph Waltz, playing a data processor given a mission to solve the ‘zero theorem’ through an apparatus installed in his ruinous chapel. Through tangled plotlines and a multitude of famous faces including Matt Damon, Tilda Swinton and Ben Whishaw, the film twists and turns in typical Terry Gilliam style.

Richard Fearon, working at Technicolor, completed the multi-faceted grade. “It was an absolute honour to work with Terry; ‘12 Monkeys’ and ‘Fear and Loathing in Las Vegas’ are some of the most iconic films of our time. The grading brief for the film was to create a colourful, bold, powerful world through which the main character appears drained in his never ending search for the meaning of life. Working with Terry and his DoP Nicola Pecorini was a real adventure that pushed every boundary. They are true artists in their field."

The grade plays an integral role in the film; the fast-paced storyline and neon colours combine to create an impending sense of doom for the protagonist. Richard continued, “Terry's background in animation gives him a very precise eye and he recognises the composition of an image instantly.” Nicola Pecorini added “[…] when we [finally] started the DI we were loaded with information and thanks to Richard's skill and good humour we were able to quickly achieve the look we wanted: an extremely colourful world outside, in stark contrast with the darkness of Qohen's chapel.”