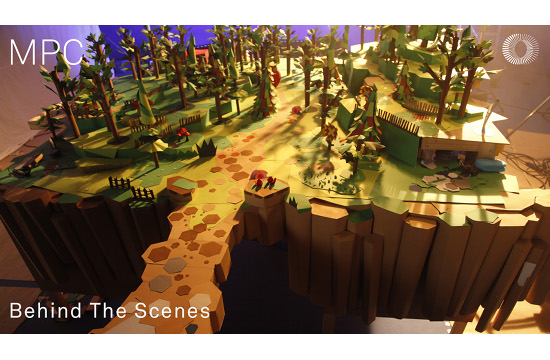 MPC and Rob worked with 180 Amsterdam on the unconventional spot, creating a paper world of adventure for the launch of ‘Tearaway’, the incredible new platforming game  from the award-winning studio behind the LittleBigPlanet franchise - Media Molecule.

The new game, made exclusively for Sony’s portable PlayStation Vita console is set in a 3D world made entirely of paper, so the team took this one step further in creating a real-life paper world at 1:12 to scale which was integrated with green screen and shot elements. MPC collaborated with Rob to create the miniature sets and scaled paper puppets, subsequently using stop motion and a live action shoot with matched moves. The elements were integrated with discreet 3D and 2D work and set extensions.

Check the spot out here. ​

Rob Blishen said,  'To blend as many disciplines as this spot contains into one coherent whole, meant I needed a team who could take something highly complex to plan and shoot and make it appear simple... a pretty good definition of one of the major strengths of MPC really'

180 Amsterdam took advantage of MPC’s newly opened Amsterdam office, firstly to complete a remote grade and also to provide a space for remote viewings between the agency team, and Rob and MPC artists in London.

Following a detailed 3D pre-vis, a miniature scale hand made paper set was constructed on a series of decks. As the protagonist is life-size and shot against green screen, the camera moves were extremely limited. Each camera move in the miniature world had to be scaled up twelve times, which meant a large studio space was required in order to shoot up to twelve meters away from the actor and only very short panning moves were feasible on the paper set.

Matte paintings extended the sets, which were built on 5x3 meter platforms. The ice segment, desert world and canyon all consisted of DMP backgrounds, which were first built in 3D to act as a realistic base before being painted. 3D character models and textures were supplied by Media Molecule, keeping the characters true to the game, which were then rigged and animated at MPC.