MPC Takes Us Behind the Magic of the M&S Fairies 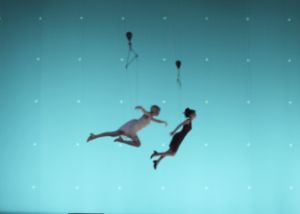 MPC completed over a hundred visual effects shots in RKCR/Y&R’s 2014 Christmas campaign for M&S, directed by Philippe Andre through Independent Films. A cheeky fairy named ‘Magic’ and her fledgling cohort ‘Sparkle’ take to the skies over Christmas to transform it with the help of M&S, swapping a dull alarm clock for a brassiere, revamping a drab wardrobe into a clothesline of glittering dresses and bringing two lovers together.

Director Philippe said, “It has been a very exciting process to create these 10 weeks of post production on Marks & Spencer. I particularly appreciated the creative involvement of all the team at MPC and the way they carefully followed my vision of the spot.  It was a pleasure to work with passionate people who have patience, talent, and great expertise.”

Using a combination of full CG environments and projected digital matte paintings, the team were able to create an entire city that was both perfect and realistic with an incredible sense of depth. Shooting took place over eight days in high summer in Prague, which saw the VFX team create a winters-worth of CG snow to set the scene.

VFX Supervisor Bevis led the 30 strong team at MPC, “When we first received the script way back in April, we looked at what we could film, versus what we could create in CG. With so many charming scenes in the film and a limited shooting schedule we relied heavily on multiple VFX techniques to bring them all to life. We created many of the settings and entire environments from scratch, not to mention the added challenge of making Magic and Sparkle look as though they were flying, when in reality they were attached to complex rig systems and filmed against green screen.”

The majority of the spot was shot with no motion control; instead a complex rig system was devised by the wire team that allowed the actresses to fly across the set. The camera would move independently of the fairies, which was then exaggerated in 3D space to create the illusion of much higher speed and more dynamic flight.

Inspiration for the wings initially came from real life, studying dragonfly and cicada insects alongside paintings and illustrations depicting fairies. MPC concepted a series of wing variations, taking flutter speed, transparency, reflectivity and size into consideration and testing a huge number of options. Carbon fibre tracking devices were used as stand-in wings on shoot, sewn into the girls dresses until the final CG versions could be added to the shots. In the opening factory scene over 60 pairs of wings were individually hand animated.

Magic and Sparkle wield their magical fairy dust in the spot, which was created using multiple customized particle systems and designed to have its own intelligence, acting to reflect the personality of each fairy.