MPC on How They Created a Christmas Icon

Behind the Work 391 Add to collection 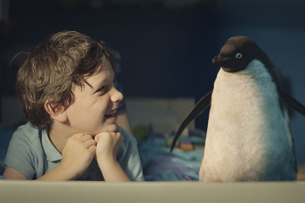 The John Lewis Christmas ad has become an annual institution that’s anticipated by the general public as much as it is by industry insiders. But behind the headlines and online buzz, there’s a team of hardworking and very creative people busying away for months to ensure that each new ad is more show-stopping than the last. From a technical point of view, this year’s campaign is the most impressive yet, starring as it does a photoreal but completely CG penguin. LBB’s Laura Swinton spoke to VFX Supervisor and CG Lead Diarmid Harrison-Murray to find out how he and the team created the waddling, lovelorn star of Christmas 2014: Monty the Penguin. (Also be sure to check out the really lovely making of film at the bottom of the page.)

LBB> The John Lewis Christmas ad is always a big deal in the UK, so Monty was always destined to be a star… did that create any extra pressure or stress for you?

DHM> Along with adam&eveDDB and Dougal [Wilson, the director], the whole team is definitely aware of the pressure of working on such a high profile campaign. Any job comes under a lot of scrutiny, but with a John Lewis Christmas ad you feel an added responsibility to get it right for the nation's Christmas!

On top of this, in this year's script there was the small matter of creating Monty, a fully CG penguin. I knew he had to be completely photorealistic, but he also had to deliver a performance of real emotion, whilst remaining authentic to naturalistic behaviour. I knew we could do it, and promised as much, but in the back of my mind I was always aware that if the audience didn't engage with Monty the ad just wouldn't work. Saying that, this is the kind of job we all want to work on!

LBB> What was the starting point in terms of character design? Did you already know what sort of penguin you were going to be working with or did you have to narrow it down?

DHM> In the case of a realistic animal we would start by gathering photographic and video reference rather than concept art in terms of character design. In some of our early meetings with Dougal, he had already gathered and shared a great library of material with us. Back then there were two species in contention to become Monty, the Adelie and the Gentoo Penguin. Once everyone agreed on the Adelie, we were able to collate a smaller library of images and videos that really conveyed the character and mood that we wanted Monty to have. We used these references to help us deconstruct how we would approach the CG build. For example, whether he has feathers or fur, what his underlying body shape would be, how we would simulate his muscles and fat, and what the form of his underlying skeleton would be.

LBB> Birds are not the most expressive class of animals when it comes to their facial expressions, particularly their eyes, what sort of challenges did that present and how did you get round it?

DHM> With all creature work the challenge is to make the animal feel like a living thing. You can make something look real, but still not alive. Moreover with Monty we really needed to deliver an emotional performance that conveyed his friendship and loyalty, his sadness and joy – but stick to natural Adelie behaviours. Studying the references you naturally project human emotion on the penguins behaviour. We found that we could convey emotion through the whole body performance including his posture. Adelies have a really long neck but a lot of the time it is quite compressed and they look like they are hunching their shoulders. We found that small tweaks to his head and neck position had a big effect on the emotions we were trying to convey. Furthermore we were able to use his feathers as an expressive device too. We varied how lifted and fluffed his feathers were between shots and this really changed his emotion. You can see Monty sometimes looks chubby and fluffy and at other points more lithe and athletic. In terms of facial expressiveness, because their faces aren't naturally expressive, we found that less is more and tiny movements had a big emotional read. We did build an eye animation rig that allowed us slightly more control than a real Adelie eye, but we rarely had to make use of it.

LBB> The relationship between the little boy and Monty is central to the whole ad – how did you kindle the chemistry between the two characters given Monty’s, err, absence from the set?

DHM> On a practical level we had various different stand in-penguins on set for the boy to interact with. These were nothing sophisticated, cardboard cut out penguins, beanbag penguins, and a toy penguin on wheels built by the art department. They are obviously important for getting the correct eye lines, but they turned out to be indispensible for getting good performances from the boy. Definitely worth the additional clean up work in VFX!

However, in reality it comes down to the director getting the performance he needs from the boy on set. Dougal excels in getting a great performance from his cast. Then the rest is up to us to create an equally engaging CG performance from the penguin. Dougal would continue to direct the performance of the penguin in much the same way he would the boy on set. You do hit that sweet spot when you suddenly feel the two characters interacting and you feel their bond and emotion. Its a great moment and reassuring as well!

LBB> I gather that the feathers were particularly challenging to create and animate – what makes them trickier than fur? What were the keys to creating the feathers?

DHM> Ultimately we decided to give Monty feathers rather than just fur to increase his realism. Real penguins have feathers, but they are so dense and fine that at times they look like fur. The detailed scrutiny of any close-up shot reveals the feather detail, but also in wider shots, whilst you can't make out individual feathers, the way the light bounces off feathers is very different to fur. We wanted to create a CG character for Dougal that didn't come with a list of caveats about what it could and couldn't do, or how close he could put his camera to the subject.

In the end the feathers we created were made of fur inasmuch as each individual barb of the feather was made of a strand of fur. The added complexity comes from the grooming and styling of the feathers, creating the natural variation in appearance and making sure all the feathers neatly stack on top of each other but still follow and deform to the underlying animation. With Monty and the sheer number of feathers he had, it just made everything more difficult to work with, but if you tried to reduce the density he just didn't look as fluffy or real.

DHM> Working with Dougal is great. He puts absolutely everything into his work from early preproduction through to the final grade. He is attentive to every detail, leaving nothing to chance, a real master of his craft. He is also always pushing you to strive for better in your work.

LBB> In the making-of video, the team talks about getting attached to Monty because you’d worked on him for so long. Why do you think he made such an impact and does having an emotional connection to a character you’re creating make a difference to a project?

DHM> I think Monty worked well for so many reasons. The concept and idea from adam&eveDDB was golden. You could read the initial script and feel immediately how great it could be, deceptively simple but so much room for emotion. Dougal’s execution of the idea was really well observed and adds to the richness of detail that really engages the audience in a strong way.

We worked really hard during the VFX to do justice to the idea and the execution with the CG performance of Monty. It’s funny because you obsess over so many tiny details that, taken in isolation, I’m sure are lost on all but the most astute viewer, but somehow all these details taken together add up to something that moves people. The problem with CG creatures is the margin for errors are so painfully tight; looking almost real just isn't any good. Or even more elusive that it looks real but it just feels cold and doesn't move people.

LBB> Monty has spawned cuddly toys, PJs… all sorts of penguin paraphernalia at John Lewis that appears to have sold out. How has it been to see people take Monty and Mabel to their hearts?

DHM> It is crazy process working on something like Monty. A small group of artists for a few months holed up in a studio, labouring over every nuance of his shape, movement, look, performance and then one day this inanimate object is released to such a huge audience. It is always a tense moment waiting for the reaction. So for the team and myself it was so rewarding to see the massive emotional outpouring for Monty and the spot. We always wanted to make people cry!

video
Making of Monty the Penguin
view more - Behind the Work