MPC & JWT Create Fracture.io for The One Club 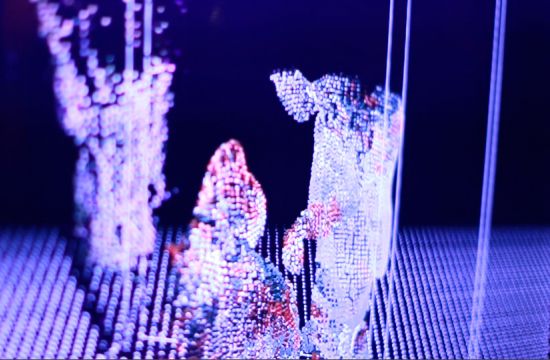 This year, MPC Digital teamed up with The One Club via JWT New York to create Fracture.io, a stunning installation experience for The One Show’s lavish after party at NYC’s Bowery Hotel. Fracture.io allowed guests – a selection of the advertising and design industries’ biggest players – to literally enter the digital space, taking 3D scans of pose-striking partygoers to generate beautifully abstracted, full body 3D renderings.

Exercising their trademarked ingenuity, the team at MPC Digital aimed to create a real-time 3D scanning and visualization system using little more than off-the-shelf hardware, the Microsoft Kinect. The result was a refreshingly uncomplicated installation that functioned on clarity of artistic vision as much as technical wizardry, and which served as a testament to the creativity celebrated at the evening’s One Show awards ceremony.

Fracture.io took the form of a 12x16ft room (built with fabrication and AV partner SenovvA) with four Microsoft Kinects aimed at the center, where guests were invited to pose for the cameras. Using their OpenFrameworks application, MPC Digital was able to instantly capture full image and depth data. A custom modified version of PCL then stitched this data into a smooth mesh and calculated the normal – a scanning solution that allowed the team to dial exposure time up or down, more effectively balancing accuracy and speed.

Once the mesh was created, it could be used as the basis for generative 3D visualizations of guests’ forms. The mesh could then be imported into Unity, which wrapped the form in splines bearing custom 3D objects. All of this occurred near instantaneously, displayed on massive screens both within and outside of the booth. On these screens the camera panned over the guest’s form and surrounding environment, utilizing a custom dynamic rack focus system driven by the same sort of 3×3 matrix found in high-end autofocus cameras. The end result is an animated generative artwork of both striking precision and abstract beauty.

Animations and meshes were then exported and automatically assigned unique URLs on the Fracture.io website gallery, allowing guests to view and share their portraits.

Client: The One Club
Title: Fracture.io
Date: May 2013