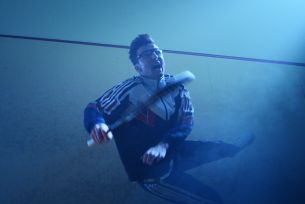 MPC Creative follows up the recent internet-breaking success of the Jonah Hill / Reebok film for Palace Skateboards, this time for Palace’s sportswear collaboration with adidas.

Written and directed by Lev Tanju and Stuart Hammond, ‘Squash Man’ released on Sunday 6 November, preceded by teasers on 4th and 5th November.

‘Squash Man’ is inspired by old-school German sportswear ads. The film plays out on a mysteriously atmospheric and smoke filled squash court as one man plays with himself.

Oh, and in typical Palace fashion it includes a hilarious voiceover.

Richard Skinner, MPC Creative’s Head of Creative Development, says: "The opportunity to work on projects like this is why we get into filmmaking in the first place. Working directly with a client who is also the writer and director allows for a seamless and collaborative process – and leads to a brilliant creative product."

Song: ‘We Can Upgrade You’ by Alexey Leonov & Friederich James Sebastian