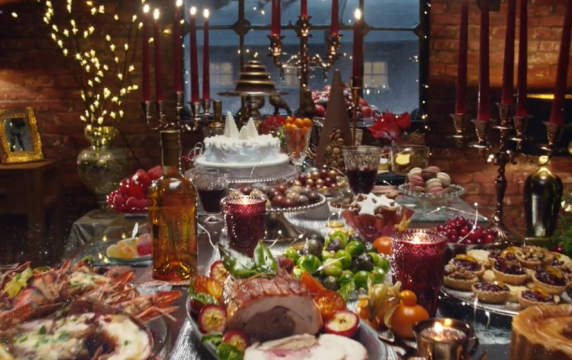 M&S has unveiled the first of four festive Food TV ads that will run through Christmas and New Year. Using the same creative idea as the core Christmas campaign, the latest ad series sees M&S’ famous Christmas strap line ‘Magic & Sparkle’ brought to life in the form of two playful fairies – who spread a little festive cheer as the stars of the retailer’s campaign.

Set to the classic Julie London version of ‘Fly Me to the Moon’, the ad opens with Magic and Sparkle perched on a snow filled roof top. The magical duo peak through a window and click their fingers to transform a bare dining table into a glittering Christmas banquet.

The spectacular festive food and drink that appears has its own touches of M&S magic. From the sparkling Gold G & Tea cocktail to the whole juicy pear hidden inside a Baked Pear & Stilton Pork Pie.

From today through until Sunday 16th November M&S will be running a Taste of Christmas Festival event in over 500 stores. The five day celebration of M&S’ awarding-winning food and drink will offer customers the chance to sample a selection of the retailers festive food range – from party food to Christmas pudding.

Taking cues from the ad campaigns, Magic & Sparkle are also working under their twitter alias @TheTwoFairies – surprising the unsuspecting public with random acts of kindness. Treating workers on long hospital night shifts, salvaging failed dinner plans and rescuing rain-soaked commuters - are just a few of the little acts the duo have undertaken to brighten up individuals days.

Fairy ‘sightings’ have been reported across the UK – including in Cornwall, Birmingham, London, Glasgow, Milton Keynes and Newcastle. Today Magic & Sparkle are spreading their magic in Leeds.

Magic and Sparkle will continue their random acts of kindness via @TheTwoFairies for the whole festive season, supported by more magical surprises across M&S stores and online channels.