MPC and The Studio of the Future

Trends and Insight 645 Add to collection 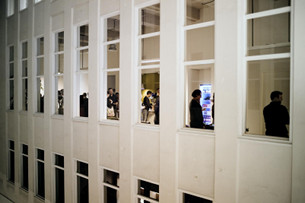 Last week amidst the canals and pretty townhouses of Herengracht, Amsterdam’s advertising industry gathered together to get a bit experimental (no, not like that). They had come to MPC’s recently-expanded office to find out how technology is continuing to shrink the world and making some of the industry’s top VFX and colour grading talent more accessible than ever. With a good nose for a story and a free bar, LBB’s Addison Capper headed to the Dutch city to find out more and join in the fun…

MPC Amsterdam is a particularly interesting part of the company’s network because it functions fully remotely. All of the studio’s hardware and equipment is located back in the flagship London office, allowing artists in Amsterdam to simply log onto a dedicated network and get to work. It also means that artists within the two different offices can work closely together on projects.

Remote technology also allows MPC colour graders around the world to grade from one location for a client in another, meaning less time spent on planes and less money spent on flights. What’s more, clients viewing a grade session remotely in Amsterdam experience next to no delay and are privy to a screen quality to match that of the grading suite back in London.

The ability to colour grade remotely isn’t necessarily a new thing - MPC first did it around 10 years ago via London’s BT Tower and a satellite transmitting to a rival company’s office in New York (hush, hush). However they first began using it in a more mainstream way five years ago as it allowed the likes of London-based Global Creative Director of Colour Grading, Jean-Clément Soret, to more easily grade with global clients that sought his abilities. Other post production companies around the world are also pushing remote colour grading services - but the team at MPC think they’re on to something quite unique with a fully remote facility. At the event last week in Amsterdam to celebrate the studio’s expansion (which has near doubled its size) and showcase its capabilities, MPC’s Head of Production Tim Phillips told LBB that he’s not aware of another company running a whole facility remotely.

So what, then, inspired the idea to set up MPC Amsterdam in such a way? “Our technology team came up with the idea,” Tim reveals. “They’re unbelievable. Originally it was our aim to open an outpost in Amsterdam, no matter what. Within a few weeks of those plans the technology team had figured out how we could launch a remote facility. There are ‘off-the-shelf style products that offer remote grading technology but we’ve actually developed this technology ourselves. It runs wholly on our dedicated network so we don’t have to rely on the general Internet for it to function.”

Launching a remote facility meant that MPC wouldn’t need engineers, bulky hardware or expensive air conditioning units on site. “It would be a much bigger overhead,” adds Tim. “If you have a few days when the office is quiet, it’s just sat here quiet. Whereas using the remote technology it’s more a case of who’s doing what and when? You rarely have a machine not being used. It’s been a real game-changer in that respect.”

It also means that each office has the ability to dip in and out of projects as and when they are needed. If Amsterdam is experiencing a bit of a lull, the VFX artists there are able to pitch in and help out on a London job. And equally, it allows Amsterdam’s relatively small on-the-ground team to work on bigger jobs like 180 Amsterdam’s recent ‘The Wonderful Life of a PS4 Player’ for Sony PlayStation.

According to Jean-Clément Soret, the idea for a remote facility is also borne out of the diminishing budgets in today’s industry. “People that were often travelling to other countries and other markets don’t often have those kinds of budgets anymore,” he tells us. “Also, especially after a long shoot somewhere, they might just not want to travel again - people have families! It also allows me to work with a much wider range of directors and creatives without travelling. Without remote technology I’d be working on two ads per week. Instead now I can do one per day.”

Response from the local market to the setup in Amsterdam has been positive - as demonstrated by the expansion. What’s more, it’s been such a successful model that earlier this year MPC opened its second remote office in Paris, which is, like Amsterdam, closely supported by the talent and infrastructure of MPC London.

Right now, according to the MPC team, there are no concrete plans for more setups like those in Amsterdam and Paris. First up they’re setting their sights getting to grips with the new markets and firming up their place within them. But with its lack of outlay and bump-up in facility reliability, it’ll be surprising if we’re not to see more of the same from MPC and other companies attempting to follow suit.

Here’s to the studio of the future.