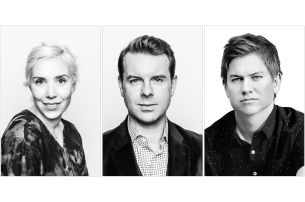 MPC has announced major leadership changes for its advertising studios in the US. The announcements were made by Mark Benson, CEO of MPC.

Justin Brukman, previously MD of MPC New York and Acting MD of MPC Los Angeles, has been appointed MD of North America. In this role he will be responsible for the overall management and direction of the advertising business throughout North America.

Camila De Biaggi has been promoted to Brukman’s previous role of MD of MPC NY.

Robert Owens who recently joined MPC is promoted to the role of MD, Advertising, MPC LA.

“Justin’s deep understanding of the US market, his total command of every aspect of production and his knowledge of MPC and our brand makes him the ideal person to lead our efforts in North America,” says Benson.

Brukman is a long-time MPC employee who has been with the company for over 15 years. He joined the company in London in 2002 and rapidly established himself as a clear leader. In 2010, Brukman relocated to NY and was instrumental in launching the Soho studio and MPC’s presence in America’s largest advertising market.

De Biaggi joined MPCNY as Head of Production in 2013 and was quickly promoted to EP in 2014. During her time at MPC, she has played a leading role in working with top advertising agencies and directors in the production of some of the industry’s most notable and award-winning visual effects campaigns. Now as MD, De Biaggi will oversee and continue to grow the vastly talented team in New York.

“We’re delighted to recognise Camila’s contributions to the success of our New York studio with this well-deserved promotion,” Benson notes. “Camila has proven ability to lead teams through complex visual effects and production projects and in doing so has become a trusted partner to our agency clients.”

Owens has recently joined MPC, bringing with him over 14 years of industry experience. During the course of his career, Owens has worked closely with many of the top directors, production companies and agencies, helping to realise their visions through the power of VFX. Robert has worked on numerous award-winning campaigns, and was instrumental in growing the finishing department; expertise that he has brought to MPC along with creative partners Claus Hansen and Noah Caddis.

“Robert has had an immensely positive impact on our business in a very short period of time,” says Benson. “Robert brings an enormous amount of knowledge and vast experience to MPC LA, and under his leadership, we will continue to grow the creative reputation and profile of our Advertising group.”

Benson continues, “In their new roles as MD, Camila and Robert will continue to develop and maintain our key client relationships, at the same time as ensuring MPC continues to prioritise providing the market place with creative, technology and production excellence”.