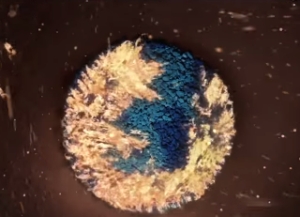 Bicoastal creative studio humble and ad agency Occam recently teamed to create a 75 second brand manifesto film for Mozilla Firefox to mark its tenth anniversary. Directed by humble's Sorrel Brae, the video launched on November 9 on YouTube and Firefox's landing page with localized versions for the UK, Germany, France, India, Australia, and more, and has received over 18 million views to date.

Firefox is a key effort in Mozilla's cause to keep the web free and transparent, and is powered by Mozilla's community of over 7,000 volunteers worldwide. To honor its ten year milestone and the spirit of the brand, Occam and Brae developed a short film that serves as a symbolic representation of Firefox's global open-source community, underscored by an organic, hand-crafted aesthetic.

"It was important for us to convey Firefox's cooperative spirit by having all of these volunteers work together to build something larger than themselves," commented Brae. "I also wanted the film to have a timeless quality, so we shot in a desert prairie and avoided showing any modern technology like cell phones or even a lighter for the fire scene. The hope was to illustrate that these concepts of freedom and community building are enduring."

The film was shot on location in California over two days, with a cast of 100 extras. Brae and DP Alex Disenhof used a 73-foot telescopic Hydrascope crane in order to capture overhead and soaring shots, and humble's on-set VFX supervisor James McEwen staged multiple permutations of crowd shots in order to streamline crowd duplication in post. humble’s post team also completed editing, compositing multiple plates together for the climactic end shot, adding 3D elements such as particles, and creating the final transition from fire to CG Firefox logo. All post production was completed in ten days.

"humble was a fantastic partner on this project and really nailed the Firefox message," said Ryan Shultz, Agency Producer, Occam. "Since humble bundles production and post, it allowed us to work more efficiently and streamline resources, which was certainly beneficial for such a quick shoot and turnaround."

"With this video being showcased on every new browser window for Firefox users around the world, we knew that it was going to be a huge event," commented humble Founder and Executive Producer Eric Berkowitz. "Our team delivered stellar work and each frame captures the brand's relatable spirit."

"I connect strongly with Firefox's open, communal ethos so this opportunity really appealed to me from the start," concluded Brae. "I'm glad we got to help Firefox celebrate its tenth birthday in such a big way."