Campaign spots by BBDO New York aim to capture the energy of the brand in a dynamic, comedic form 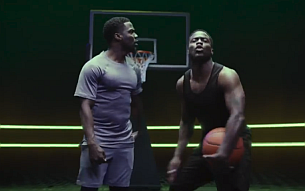 Today Mountain Dew unveiled its "Give Your Head a MTN DEW KICKSTART" campaign, featuring actor, comedian and overall hardest-working-man-in-show-biz, Kevin Hart.
This marks the first time DEW Nation will see Kevin, the face of the brand, in a DEW commercial, venturing inside his head – literally – as he drinks a MTN DEW KICKSTART.
MTN DEW KICKSTART, made with real fruit juice and now available nationwide in 11 awesome flavors, provides a great-tasting, refreshing boost.
As with everything Kevin does, fans should expect the unexpected in this series of 15-second spots, which play off what's going through his head while he's getting pumped up with a MTN DEW KICKSTART. In "Wrestler," WWE Hall of Fame Legend 'Mean' Gene Okerlund interviews Kevin, who channels his convincing wrestling persona, and makes DEW Nation wonder if we'll see the comedian in the ring one day. In "Slap," which debuted this past weekend during the NBA Playoffs, viewers got double the Kevin as he gets psyched before playing basketball. Rounding out the three spots is "Chopper," which features Kevin revving the engine to his newest set of wheels – a neon-green colored motorcycle.
"People always wonder what goes on in my head and I don't blame them. There's a whole lot going on in there folks, and now you finally get to see what pumps me up -- spoiler, it's me," said Kevin. "What's great about this MTN DEW KICKSTART partnership is that we get to have fun with it. Between bringing a fan courtside at a NBA Playoff game to filming these commercials, I'm proud of the work we're doing and hope the fans will enjoy it, too."
The commercials are part of the year-long partnership between Kevin and MTN DEW KICKSTART that includes a 360-degree marketing campaign (TV, digital, social and experiential) and integration with Kevin's Irresponsible Tour.
"These commercials perfectly capture the energy Kevin Hart is known for, while depicting the refreshing boost fans can expect from MTN DEW KICKSTART," said Chauncey Hamlett, senior director of marketing, Mountain Dew. "You drink a MTN DEW KICKSTART and it's as if there is a little Kevin Hart inside your head pumping you up, fueling your work ethic in pursuit of whatever it is you're chasing. We love the parallels between Kevin's mentality and our brand, and the collaboration on real-time opportunities and larger campaigns like this have been second to none."
The partnership was announced at NBA All-Star 2018 with the 'Closer Than Courtside' campaign, which included a pop-up experience dubbed Courtside Studios and the launch of the #CourtSidekickContest.  The winner of the contest recently joined Kevin courtside at a NBA Playoff game.
MTN DEW KICKSTART gives DEW Nation a refreshing boost with 11 available flavors (ranging from five to 80 calories per 16 oz. can), including MTN DEW KICKSTART Original DEW and MTN DEW KICKSTART Ultra Original DEW, which launched earlier this year. Both feature the bold taste of the original flavor of MTN DEW with five percent juice, Vitamins B and C, and a kick of caffeine.
DEW Nation can watch the three commercials on MTN DEW social channels, and visit MountainDew.com/Kickstart for product information on the full flavor lineup.
view more - Creative