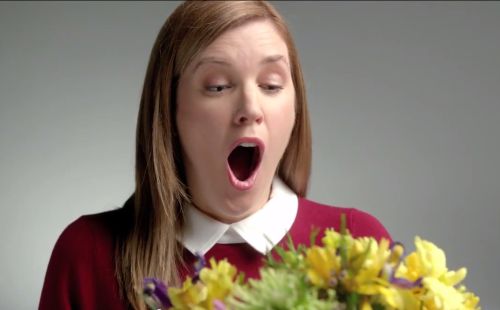 Edible Arrangements, the originator of the fresh fruit bouquet and global category leader, unveiled a new creative direction for its first integrated marketing campaign in partnership with The Richards Group. The effort marks an evolution from several different creative campaigns for different media to one streamlined positioning played out from storefronts to social media to broadcast to banner ads.

The multifaceted, multimillion-dollar campaign, created by the Richards Group, Edible Arrangements' creative agency since July 2013, combines the new tagline “Pick Fruit. It's Fresher.” with a fully integrated effort celebrating the choice of fruit over flowers.

“Reaction” debuts in advance of Mother’s Day on April 28 with 30- and 15-second versions. The spots feature a mother receiving flowers and her openmouthed reaction, which devolves from initial enthusiasm to a bored yawn.

“The message is clear this Mother’s Day: Pick fruit. It's fresher,” said Jeff Lobb, Edible Arrangements’ chief marketing officer of the strategic campaign direction. “This advertising, across all channels, pokes a little fun at the same old gift and encourages families to celebrate mom in a fresh way. And our research shows that moms really appreciate creativity and ingenuity in gift-giving.”

This campaign, the most expensive advertising undertaking from the company, which is celebrating its 15-year anniversary, reflects a commitment to an accelerated growth trajectory. Edible Arrangements, with franchises in 49 states and 14 countries, aims to expand the number of retail stores (nearly 1,200).

The media buying for the campaign is handled by Horizon Media, Inc. and the public relations agency is Crenshaw Communications