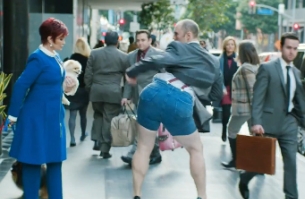 Filmed on location in LA, the advert continues to show that saving money really does make you feel epic and then some! It opens with Dave who looks like your typical everyday worker on his way to another long day at the office however, there’s a surprise twist.

Due to the epic savings Dave has made with MoneySuperMarket, he steps out of his car and begins to strut his stuff to the sound of female power anthem ‘Don’t Cha’ by the Pussycat Dolls. As he makes his way up the street, people stop and turn their heads in awe, as the camera pans out we can see why as it reveals that our hero isn’t sporting typical business attire. Instead, Dave is rocking a pair of booty enhancing denim shorts coupled with some killer platform heels.

As Dave wobbles his hips to the beat, he is joined by a host of dancers who help him shake his booty in celebration as onlookers nod in approval. Finally, Dave saves his best booty shake for last as he wiggles past none other than Mrs O herself who purrs “Dave darling, you are so MoneySuperMarket.”

The campaign is due to debut on Saturday 17th January with a key spot during the revamped Stars in Their Eyes on ITV1 and will receive additional marketing support with activity planned across PR, CRM and social media channels, using the hashtag #epicstrut.

Gareth Helm, Brand Director at MoneySuperMarket.com, said: “Whilst the economy may be bouncing back, some households are still feeling the pinch. That’s why we continue to celebrate how great it feels when you save hard earned cash on your household bills at MoneySuperMarket.  Building on the success of our 15 foot African Bull Elephant, this time we tap into our version of a victory dance – Dave feels so epic having saved on his car insurance with us that he just has to strut his stuff and shake his bountiful behind.  And we couldn’t have asked for anyone more suited than Sharon Osbourne to bless this feeling.”

Kyle Harman-Turner and Martin Rose, Creative Directors at Mother said: “High heels, hot pants and a bottom wider than Kim Kardashian. All of them can be found in the latest MoneySuperMarket film that shows Dave saving on his car insurance, strutting his stuff like a queen diva. Our recipe was simple; a sprinkle of J-LO, a dash of Beyonce and a side serving of guilty pleasure in the Pussycat Dolls. All of which were channelled via the hot pants of a middle management bloke from Croydon.”