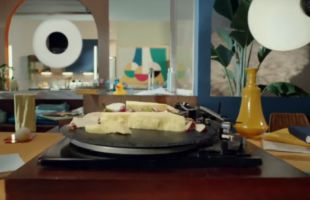 This week marks the launch of the new Castello Tickler ‘Rebel’ campaign, created in partnership with Mother. The new campaign showcases Tickler’s unique taste and rule-breaking approach to cheddar-making, taking inspiration from the equally unconventional world of surrealist art.

‘Rebel’ is the latest and boldest evolution in a series of art and installation-inspired campaigns that have been created collaboratively by Castello and Mother, including 2014’s ‘Balanced’.

Lorenza Marzocchi, Senior Global Brand Manager for Castello Tickler Cheddar comments:  “Cheddar is a winning proposition for the Castello portfolio, and plays a key role in achieving our 2020 strategy.  Tickler in the UK is a shining example of the success of Castello Cheddar in the market.  Once again, Mother has developed an ad that truly embodies the spirit of Castello…and the idea of running the ad backwards was genius”.

The 20 second TVC was filmed in one continuous, forward moving shot. In the spot, we move through the household like a low-flying aircraft, watching it evolve below us. The safe becomes the oven, the bathroom becomes the kitchen sink, which in turn becomes the kitchen in one fluid movement. Nothing is quite what it seems and the audience’s sense of perspective is constantly shifting.

In true rule-breaking fashion, while it was shot moving forwards, it’s being played out backwards, starting unconventionally with the pack shot. The reverse direction of movement is only revealed in the final moments of the spot, when the human hand is revealed to be slicing the cheddar backwards.

Mother Creative Director, Kit Dayaram, comments: “Castello's Tickler is known for breaking the rules in the world of cheddar, so it was only natural for us to break the rules in our creative approach; from the script to the direction to the music we pushed for a surreal direction that broke the rules. Shooting a single continuous move through a home allowed us to play with way we see and reveal its contents. Constantly showing things are never what they seem. This rule breaking even entered the edit, we start the film at the end, maybe this is the first ever TV commercial to play out backwards?!'”

As well as the 20-second brand TVC which premiered on Monday June 6th, the work will also run online.