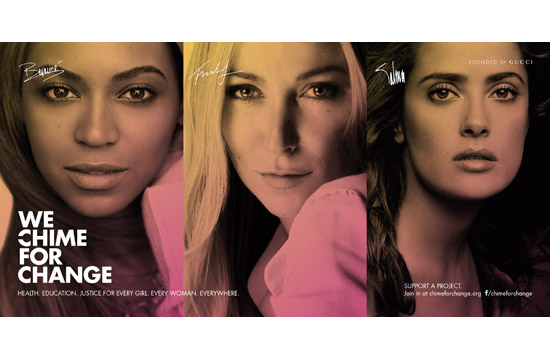 The two agencies have been working with Gucci since September when they were tasked with the creative design and overall brand identity for CHIME FOR CHANGE, which was launched at TED2013, and is led by Frida Giannini, Beyoncé Knowles-Carter and Salma Hayek Pinault. CHIME FOR CHANGE serves to convene, unite and strengthen voices speaking out for girls and women around the world and focuses on three key pillars: Education, Health and Justice.

The movement aims to provoke, collect and share powerful stories of girls and women globally. Salma Hayek Pinault is the executive producer of the CHIME FOR CHANGE film unit, developed in coordination with Sunshine and Mother, which is dedicated to creating a variety of short films about inspiring girls and women from around the world.

In addition to live performances and collaborations from leading global artists, the concert will also serve as a platform to broadcast inspirational and provocative short films and stories spotlighting girls’ and women’s issues globally. Mother and Sunshine have worked on video content for the event as well as branding, merchandise and set design.

Throughout the project Mother and Sunshine have been working with a number of organisations including the Global Philanthropy Group, Catapult and event production company Control Room.

Stephen Butler, Creative Partner at Mother commented: “Working with the team at Gucci, as well as the other partners around the world, on such a meaningful project has been a unique experience. From the first day of the project we were presented with a blank canvas on which, in partnership with Gucci, we could realize not only the brand design, but also its narrative. Add to that the staging of a global music event and one has an experience that has been thrilling.”

Al MacCuish, Co-Founder of Sunshine said, "It's incredibly exciting to be part of a project that provides film makers and story tellers from around the world with a platform to connect with audiences who care passionately about education, health and justice for girls and women. We've established The CHIME FOR CHANGE Film Unit to shine a spotlight on inspirational stories relating to the key passion areas, with the hope that they will galvanize people around taking action to further the causes highlighted".