Some of the biggest names in adland will meet to discuss tips, tricks and trends 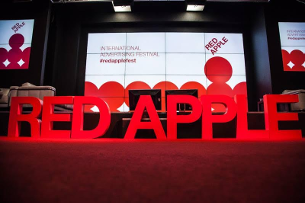 The International festival Red Apple will be held on 16-17 of February in Moscow, Russia.

The philosophy of the festival is sharing ideas and creativity. Red Apple's program breaks through the limits and tries to find inspiration for advertising spheres - science, culture, IT, media. This year, as well as different sections, lectures and workshops, guests would be rewarded with bunch of pleasant surprises.

The second – presentations of the best cases from 2016, where the creators of the brightest, most affecting and most impressive projects will talk about the creation process of every clip. The program includes: “Sun for the best friend (Pedigree & BBDO Moscow), “The Angriest whopper” (Burger King & Fistashki), “Survive in Europe” (Aviasales) and others.

The third – a series of workshops themed around “Boosting your creativity”. During these classes business-strategists, hi-tech specialists, actors and artists will talk about the unusual approach of boosting creativity: scribing and sketchnote, mindmapping, voice control and design thinking.

Besides, during two festival days awards ceremony will be held in 18 nominations and the Russian Advertising Academy will award the most courageous ad with a special prize “Breakthrough of the year”.

As usual a great choice of speakers is provided on festival. Roman Firayner (Instinct), Andrew Gubaidullin (Voskhod), Vladilen Sitnikov (Hungry Boys), Polina Zabrodskaya (Publicis London), Dragorad Knez (Publicis Russia), Valentin Smolyakov (ACAR) and 70 other speakers will bring the world of advertising closer together. You will learn how bright and effective projects are born, how advertising and hi-tech change the world, and how would media reality look in 2025.

Not only heroes of Russian creative industry would appear, but people well-known in world advertising sphere, among them – Sascha Kuntze (OgilvyDubai), Haruko Tsutsui(DentsuTokyo), Julian Katz (BBDO USA), Sneha Nagesh (PHD’sGlobal). As always, Red Apple would be a touchpoint between two cultures and a place of continuous communication of different ideas, East and West.

This is just a brief overview of the two-day festival program. The rest of the speakers and discussions can be found on the official festival website - festival.ru/en