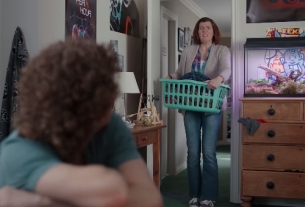 Let’s face it, acne is the pits. And the acne category is awash with confidence clutter. Every brand is shouting about confidence loud and proud— and teens just don't buy it. That's why Droga5's brand strategy for Clearasil taps into a more real source of confidence: reassurance. During custom qualitative research with teens, we found that often times, it's just the reassurance that 'it gets better' that helped teens feel more confident. The strategy leans hard into that insight, offering teens the reassurance that acne won’t last forever— but while it does, Clearasil will help.

It’s a bold stance for an acne brand to take, but when you’re the brand that literally started the category, you have the right to be a leader.

”Let’s Be Clear” is the brand’s first national campaign with creative shop Droga5 at the helm. The campaign debuted today with a 30 second television spot titled, “Interruption.” The spot highlights the reassurance that some things don’t last forever—including acne. Or your mom barging into your bedroom totally unannounced.