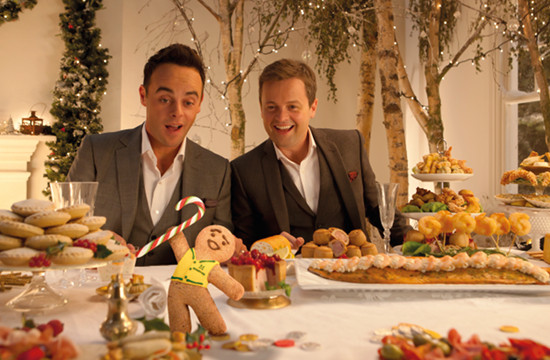 Morrisons is set to launch its new Christmas TV advertising campaign this Friday 8th November during the prime-time slot of ITV’s Coronation Street. The campaign, featuring the nation’s favourite duo, Ant & Dec, focuses on how Morrisons’ expertise helps to create a sumptuous Christmas spread, with a pinch of festive magic thrown in for good measure.

The ad sees Ant & Dec drawn into an enchanting winter wonderland by a playful Morrisons’ gingerbread character, who proceeds to sing to Ant & Dec about the array of festive foods. Set to the tune of the Disney classic ‘Be Our Guest’ from Beauty and The Beast, with rewritten lyrics, the gingerbread man dances around a table laden with Morrisons’ festive treats. He is accompanied by animated elf-sized versions of Morrisons’ M Kitchen chefs who are busy adding the final touches to a festive feast that Ant & Dec tuck into with gusto.

Directed by creative animators Psyop and produced by DLKW Lowe, the ad was filmed at Pinewood Studios. The focus is on recreating the sense of excitement felt at Christmas time and demonstrates how shopping at Morrisons can deliver a festive feast that is affordable for everyone, no-matter what your budget.

The full-length spot is supported by a selection of shorter 20” and 10” TVCs that feature two of the real M Kitchen chefs and highlight individual products alongside their great value prices. For example, Morrisons’ traditional and chocolate chip Panettone that is made in store from scratch by its bakers everyday for just £2 each and the Crackling Turkey that is prepared in store by its butchers. Morrisons’ premium tier M Signature products are also set to feature in a 30” TVC which will air from late November.

Belinda Youngs, Morrisons Corporate Brand Marketing Director said, “Our Christmas advertising is all about celebrating great tasting food and great prices offering the very best value for money at Christmas. Our chef developed food takes centre stage and shows how we can make Christmas not only magical but also easy and affordable for everyone.

We’ve been working with Ant and Dec all year and who better to help us celebrate than the nation’s favourite duo. However, they are not the only stars in our advertising and our M Kitchen chefs also make an appearance. They have been busy since last January developing and approving all our products to ensure that not only does our food taste great but it is great value too. Our host, Ginger, can also be bought from our Cake Shop.”