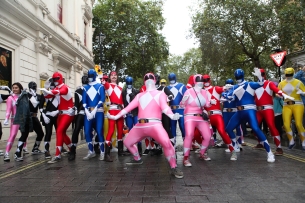 DigitasLBi will now partner with MorphCostumes to develop a digital strategy focussing on driving awareness of its broader product range in order to help grow its share of the highly competitive global costume market.

Founded in 2009, and originally called Morphsuits, the Scotland-based costume brand was created by brothers Fraser and Ali Smeaton and friend Gregor Lawson. The range originally included just six plain coloured Morphsuits but has since expanded, following the acquisition of Digital Dudz, to include digital designs with integrated wearable technology created by ex-NASA engineer and YouTube celebrity Mark Rober.

DigitasLBi will work with MorphCostumes to drive performance of its range of costumes beyond the iconic Morphsuits on a global scale, harnessing key digital channels.

The deal has a performance-based element in line with DigitasLBi’s continued drive to find new ways of working with clients and to disrupt the traditional client-agency relationship model.

The MorphCostumes business will be run out of DigitasLBi’s Edinburgh office with teams engaged throughout Europe, Asia and North America.

MorphCostumes has also been named as a sponsor for Devotion, the latest iteration of the DigitasLBi Rave, which takes place tonight, Thursday 5th May.

Fraser Smeaton, CEO, MorphCostumes said: “We are excited to be working with DigitasLBi. It was essential that we appointed a global agency with digital capabilities in all of our key markets. It was particularly refreshing and a significant appeal to engage in a performance-based commercial model.”

Kristin Ruby, Managing Director, Edinburgh at DigitasLBi said: “We’re delighted to be partnering with an entrepreneurial, highly creative business like MorphCostumes, and we’re really looking forward to helping them achieve their ambitious growth plans globally. Besides, isn’t it every agency’s dream to work with the ‘global brand leaders in all-in-one-spandex’? The opportunities are endless.”