More than an Eye on the Future

Khaled AlShehhi, executive director of marketing and communication at UAE Government Media Office talks us through Dubai’s Museum of the Future 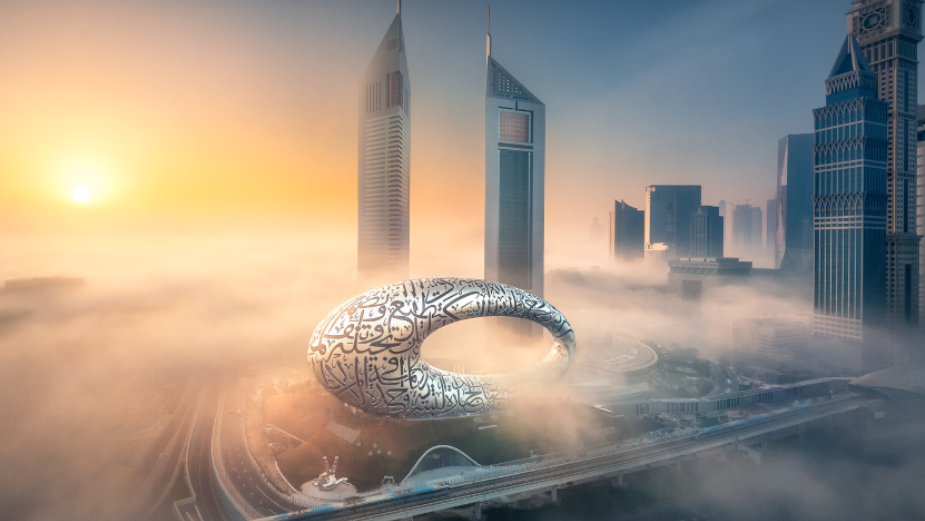 The future has always been a focus for the UAE, for it helps shape and transform the present for the better. Innovation and technology are keywords often associated with Dubai and with good reasons. In another bold move, the UAE announced its plan for the Museum of the Future (MOTF) in 2015. On the auspicious palindrome date of 22/02/2022, the building, named by National Geographic as one of the most beautiful building in the world, was inaugurated.
This was always going to be so much more than the opening of a public building to visitors because as well as an exciting exhibition space, it is set to become a hub for regional and world scientific talents. Becoming a global gateway to the future, with its design and latest innovations, the Museum of the future is also set to position Dubai as a testbed for emerging technologies and an exploration base for talents, inventors and creative professionals from all over the world to unravel the greatest challenges that will shape the future of humanity. It will provide a platform for testing the innovations of the world’s leading technology companies, and a place for partnerships with major universities and international research institutes. 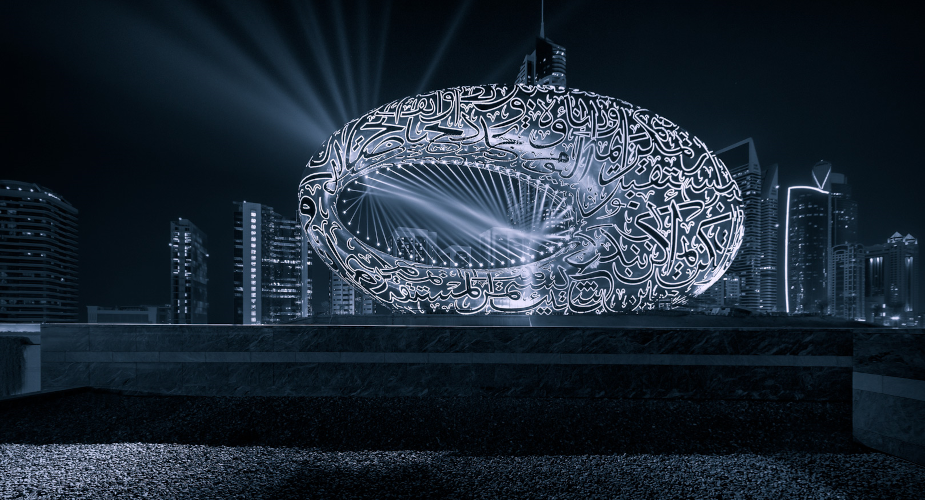 The Museum of the Future is a seat of learning, a platform to study the future, design its ideas and create deep discussions about its trends in all scientific, development and humanitarian sectors. It will lead the science and knowledge movement in the Arab region, being a comprehensive lab to future technologies, ideas and cities.
The ambition with the launch campaign was for the country, the region and the world to sit up and take notice of the gift Dubai was offering them. Like the seven-story pillarless iconic landmark, an eye-shaped building featuring a stainless-steel façade being illuminated by 14,000 metres of Arabic calligraphy, we had to be bold, daring and memorable. This vision led to a constellation of activities, stunts and operations, both in the physical and digital worlds, to encapsulate the mission of the Museum of the future and make it compelling to the public and all its audiences.

You got mail from the future

22/02/2022 was literally a date with the future so real life ‘Iron Man’, Richard Browning, was asked to put on his gravity-defying ‘Jet Suit’ to perform spectacular aerial stunts and give away exclusive tickets to crowds. The British daredevil inventor, who holds the Guinness World Record for the fastest flight in a body-controlled jet suit, thrilled crowds in various spots across the city with his acrobatics and the ‘invitations from the future’ that he handed out, providing people with exclusive access to the iconic Museum of the Future.
An event of this magnitude and a building of this significance deserved an awe-inspiring and attention-grabbing welcome. Richard Browning and his Jet Suit have certainly fulfilled their mission, in the air, on the ground and online, creating a massive buzz. The reception he received in the UAE has been spectacular, with recordings of his antics spreading the word across social media. An invitation from the future delivered by a man in a jet suit certainly got people talking and excited. 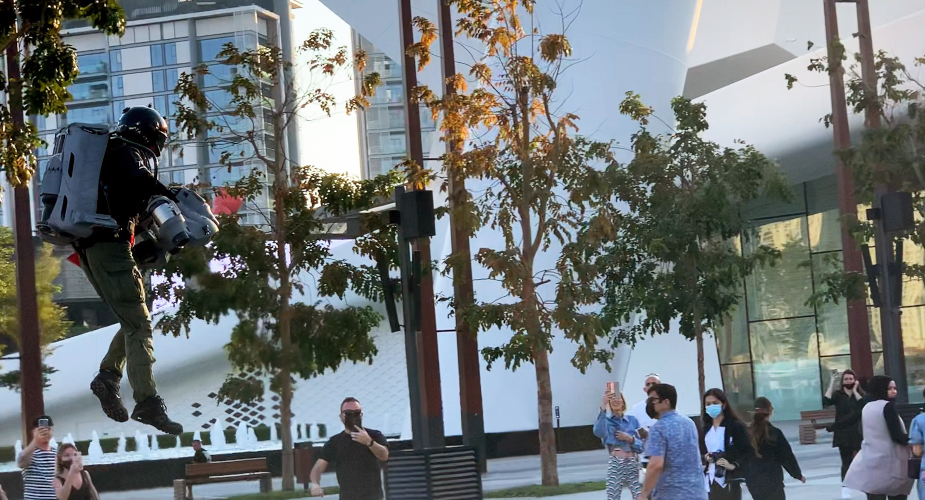 Did this car fly and park inside the Museum?

This reference to sci-fi movies in general and the Avengers series actually started a few days earlier with footage that went viral and travelled the world at the speed of light. Clips of a flying car landing inside the soon to open Museum of the Future, via a retractable hangar door at the top of the building, emerged on social media. More subsequently appeared, adding weight to the sighting.
As well as being widely shared across several platforms, the scene provoked an intense debate: was it real, did it happen or was it computer graphics? The more the videos got shared, the more the debate grew on social media. It certainly looked real and was plausible enough considering Dubai’s and the UAE’s track record of innovations and breakthroughs. But then again, with the impending opening of the Museum of the Future, was it too much of a coincidence? Some viewers asserted the videos used CGI.
The clips, produced by Dubai-based Misfits, were meant to capture the public’s attention, a fine balance between possible and impossible, blending present and future. The stunt recalls the UAE Government Media Office’s award-winning Double Moon operation for the Emirates’ Mission to Mars. It is, in essence, a form of entertainment that draws attention and creates a huge level of awareness and anticipation about the inauguration and opening of the Museum of the Future. The flying hover stunt, along with other videos and activities that illustrate the positioning and significance of the museum, is meant to bring the future into our present and make it more real, achievable and concrete, like the Museum itself

“Think next time you blink” triggers curiosity about our world

On the inauguration day, a beautiful three-minute video illustrated what happens in 250 milliseconds - or a blink of an eye. “Think next time you blink” encourages viewers to explore and question reality because an inquisitive mind is what propels us forward. It reflects the journey that brings visitors closer to the future, to experience its amazing details and feel it with all their senses. The Museum aims to enhance the love of science and knowledge in people’s minds, and trigger their curiosity about what awaits them in the future. This is particularly true for the younger generations, who are the key to open new doors and borders for the future. Videos like “Think next time you blink” go a long way in popularising and promoting the pursuit of science.

The building, which has been classified as one of the most architecturally creative in the world, has a hollow middle, forming a human ‘eye’ representing the future we see tomorrow. Inside, visitors will be able to see the latest technologies of virtual and augmented reality, big data analysis, artificial intelligence and human machine interaction. The exterior façade of the building comprises windows that form quotes from H.H. Sheikh Mohammed bin Rashid Al Maktoum, vice president and prime minister of the UAE, ruler of Dubai. They read:
“We may not live for hundreds of years, but the products of our creativity can leave a legacy long after we are gone.”
"The future belongs to those who can imagine it, design it, and execute it.”
“The future does not wait... The future can be designed and built today."
The Arabic calligraphy engraved quotes on the Museum of the Future are designed by the Emirati artist Mattar bin Lahej. It is the only building in the world that has a surface covered entirely in calligraphy art. This unique feature, plainly visible before the opening, was also used to great effect to promote the Museum’s impending opening. To help welcome the new icon to the UAE’s impressive portfolio of architectural landmarks, the Museum of the future’s calligraphy was projected on Qasr Al-Watan, Burj Khalifa, Burj Al Arab and the Dubai International Financial Centre Arch among others for a week ahead of the opening.
As well as these static icons, the Dubai Metro changed its livery for the occasion and took the calligraphy art on its journeys up, down and across the city, reaching millions of residents and visitors. This contributed to elevating the event in the public consciousness.

Dubai International Airport welcomes you to the future

Arriving passengers in Dubai received a custom commemorative stamp in their passports. It featured the distinctive eye-shaped building and will act as a memento of a journey that shaped their and the world’s future. Dubai sees the Museum as its gift to the world, as it will contribute in creating a deep and extensive global intellectual movement about exploring and foreseeing future changes in the scientific, economic, developmental and humanitarian fields. Like the airport, it will connect thinkers and experts from around the world through forums, and research and knowledge sessions. The Museum aims to embody the future before it happens, and create future living and knowledge experiences, designing the cities, the communities and the lives of the future. With this stamp, today’s travellers will remember their future was shaped by events on 22/02/2022. 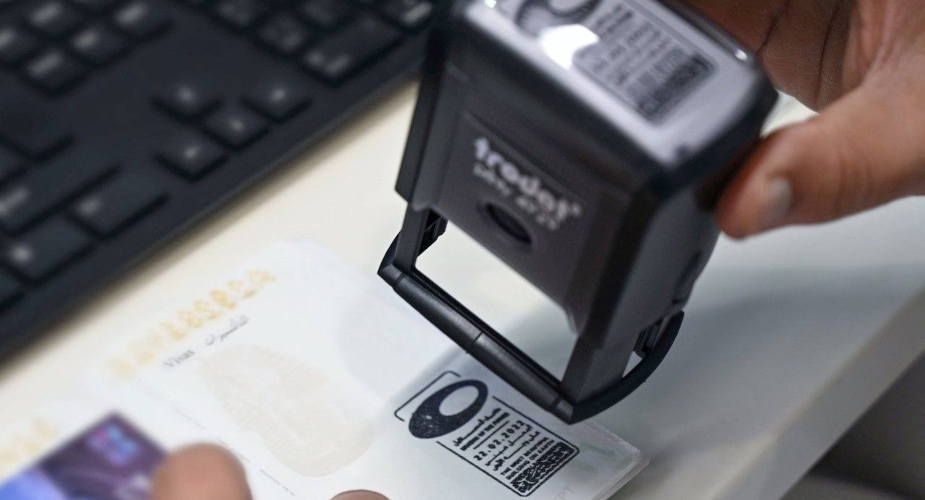 Launching not a building or an institution but a promise to make tomorrow’s lives better takes more than an ad campaign. It requires people to pay attention, get on board and enjoy the ride. Blending entertainment and information, this campaign has been deployed across touchpoints and platforms that facilitate sharing. People have become the message and the messenger, amplifying its reach and cut-through. Using bold and striking ideas, the UAE Government Media Office has yet again pushed the envelope with G2C communications. 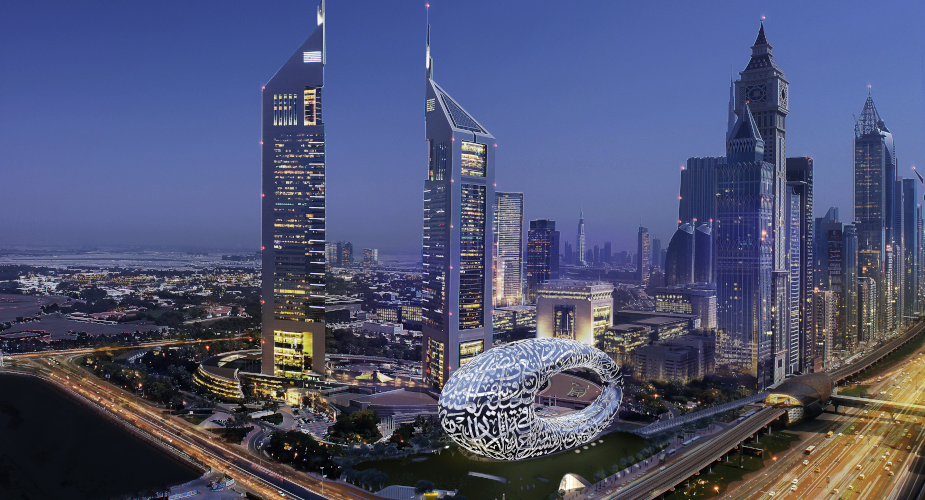 Since its inception, the UAE has always been led by a futuristic vision that has been expressed in many different ways. For example, it is the first country with a minister for Artificial Intelligence, Digital Economy and Teleworking Applications. In 2017, the UAE took a new step in its innovation journey with the National Strategy for Advanced Innovation. It aims to enable individuals and institutions to identify the opportunities and challenges in the UAE’s journey towards its centennial goals and to transform the country into a world leader in science, technology, and innovation.
This futuristic fibre runs deep in the country’s psyche, giving it a meaningful, authentic and distinctive positioning that makes Dubai the most natural home for the Museum of the Future. It also makes this campaign legitimate and impactful. Another masters stroke in soft power.
view more - Trends and Insight