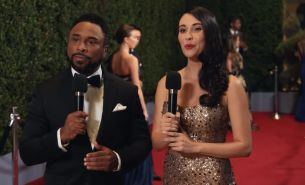 Social activist, public speaker, and Vanity Fair Contributing Editor Monica Lewinsky announces today the launch of #DefyTheName – the campaign for 2018’s National Bullying Prevention Month. It follows the success of her 2017 #ClickWithCompassion campaign, which was nominated for an Emmy for Outstanding Commercial for its award-winning PSA. This year’s campaign enlists a who’s who of big names to show those experiencing bullying that they’re not alone – and in fact part of an incredible community of celebrities, entrepreneurs, thought leaders, artists, and more.

The #DefyTheName PSA disarms the most common type of bullying behavior, name calling, by featuring an all-star cast acknowledging the hurtful names they were called as young people in situations that highlight their success and achievements. BBDO New York, the award-winning ad agency, created the pro bono piece, working closely with Ms. Lewinsky, and her award-winning public relations firm Dini von Mueffling Communications, to insightfully address the growing epidemic of bullying (both online and off). Here is the PSA, which can be shared with the hashtag #DefyTheName –

#DefyTheName encourages those on social media to change their name (not username) to reflect their bullied name (i.e. John “Bullied Name” Doe) and share the campaign’s PSA and/or their own story. The net effect is to flood social media with a community that proves that bullying and name-calling don’t reflect one’s real self-worth. It especially sends a powerful message to teens: Don’t let the name define you. #DefyTheName

“From personal experience I know that one of the most insidious effects of bullying is the feeling of isolation. Especially for vulnerable populations, like our youth, it’s feeling alone and suffering in silence that breaks down confidence, degrades self-worth and leads to even worse consequences,” says Lewinsky.

“On social media, names and words are often used as weapons. By showing the names that well-known and highly accomplished people were once called as kids, we hope to use social media to diffuse the power of those weapons,” said Greg Hahn, Chief Creative Officer of BBDO New York.

“The hurt caused by name calling causes pain that lasts a lifetime,” said Dini von Mueffling, principal of her eponymous PR firm. “#DefyTheName lets everyone know that even their greatest heroes have experienced memorable shame and pain. It’s our honor to help Monica bring this campaign to life, especially at a moment of extraordinary name calling in our country.”

Monica Lewinsky entered the national consciousness in 1998 and overnight her previously private life became the first major, global news story to break on the nascent World Wide Web. Her reputation savaged, in then unprecedented fashion, she returned to public life after a self-imposed departure and solidified herself as a uniquely informed voice in the anti-bullying space. Ms. Lewinsky works with numerous anti-bullying organisations, and her 2015 TED Talk, “The Price of Shame” has been viewed over 13 million times and translated into 41 languages.

A United Nations Children’s Fund report released this year found that nearly half of 13- to 15-year-olds around the world (150 million adolescents) have experienced bullying or physical violence from peers. A study last year in the journal Pediatrics estimates that bullying causes 1 in 5 teen suicides. The Center for Disease Control reports that suicide is the 2nd leading cause of death (after unintentional injury) for adolescents age 15-19.

This campaign is gratefully presented with support from the following organizations: The Amanda Todd Legacy, Anti-Bullying Alliance, The Childhood Resilience Foundation, Crisis Text Line, The Diana Award, Ditch The Label, Heart Mob, iHollaback, Project Rockit, Sit With Us, Think Before You Type, and The Tyler Clementi Foundation