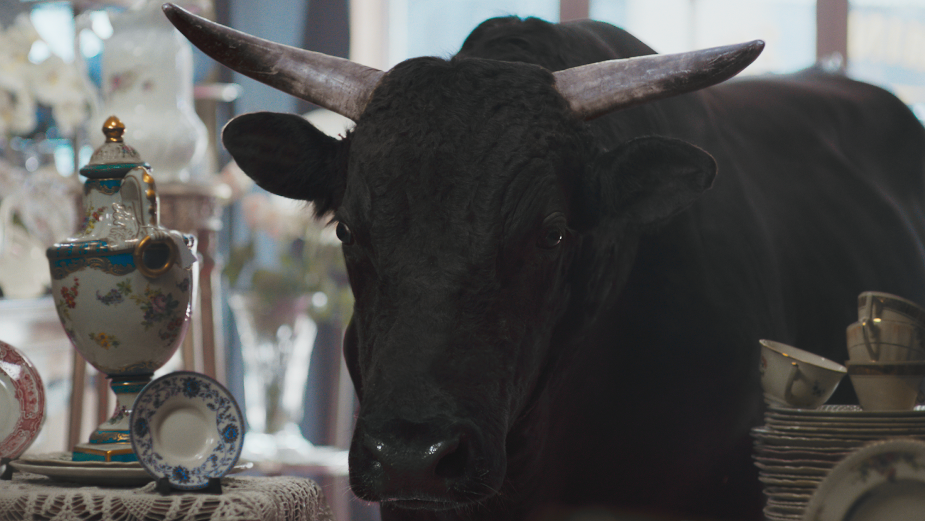 Today MoneySuperMarket is launching a new TV advert and multi-media campaign introducing the Money Calm Bull. The campaign builds on last year’s rebrand, which highlighted the feeling of calm you can get from knowing your bills are under control with MoneySuperMarket.

The new advert, created by ENGINE, will be the fourth of the ‘Get Money Calm’ series, which pledges to customers that MoneySuperMarket will help people experience more financial peace of mind. The spot opens with the Money Calm Bull walking very calmly through a china shop, followed by a number of escalating, anxiety-inducing scenarios, from a chaotic kids’ birthday party and an army boot camp, to a fishing trawler in a storm. The spot culminates in the Money Calm Bull serenely riding an asteroid heading for Earth.

Whether he’s in a perilous, antagonising, or just socially awkward situation, the Money CalmBull remains completely at ease because his bills are under control with MoneySuperMarket. Matt Berry’s voice accompanies a gentle Mozart score throughout,ending with the call to action to 'Be like the Money Calm Bull and Get MoneyCalm.'

The Get Money Calm promise is at the centre of MoneySuperMarket’s business strategy which offers personalised products and tools tailored to individual customer’s needs. In the past year, the company has launched new products including credit scoring, energy monitoring, and car alerts, which sit alongside traditional price comparison in areas such as energy, insurance, mortgages, loans, credit cards, and broadband.

MoneySuperMarket has worked with ENGINE to create an integrated marketing campaign that spans TV, BVOD, OOH, Radio, Social, Digital and CRM. The 60” TV spot launches this Friday 19th June 2020, with an ad directed by Nick Ball with Blink Productions, with post-production by the Untold Studios and voiceover by actor Matt Berry.

Lloyd Page, marketing director at MoneySuperMarket,commented: “It’s been just over a year since we relaunched our brand and we know we have a powerful platform in GetMoney Calm. The campaign is about communicating the universal, wonderful feeling of calm you feel when you know your bills are under control with MoneySuperMarket.

“The campaign is just part of the story. The new experiences and personalised tools we’ve launched are about helping customers save money in more ways, showing we’re a place customers can trust to help with all their financial needs, rather than a one-off solution to the annual problem of car insurance or energy switching.

“The new campaign sums up that feeling in a more powerful and distinct way than we have done before, allowing a far greater consistency in our execution. So, when it comes to your finances and bills, Be like the Money Calm Bull, and Get MoneyCalm.

Billy Faithfull, chief creative officer, ENGINE Creative commented: “He’s a two-tonne, toss-you-in-the-air prize winning bull the size of an ice cream van, who’s calmer than a banana. If there is a world where The Money Calm Bull doesn’t exist to help us reach a higher plane of Money Calm, I don’t want to live there. Thank goodness MoneySuperMarket’s commitment to helping people reduce financial anxiety is matched only by their creative ambition.”