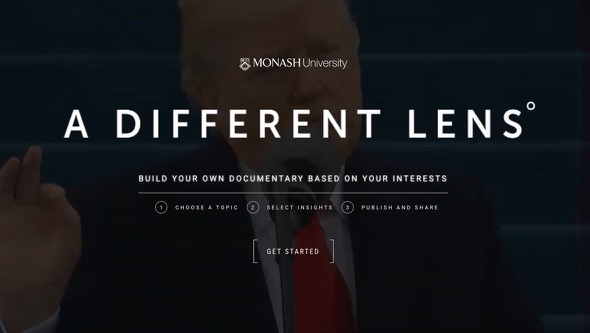 Monash University has launched an innovative content publishing platform that allows students and industry professionals to build their own documentaries based on issues they find interesting.

Purpose-built by Y&R Melbourne*, the proprietary technology seamlessly builds bespoke documentaries in real time. Launching with seven broad themes, there are hundreds of hours of footage, cutaways and music tracks, with millions of possible outcomes.

To view the platform, go to: http://adifferentlens.monash.edu/.

content for an audience of one, instantly. We're excited to give current and potential students, and interested members of the community, the ability to engage with the issues most important to them."

Says James Wills, creative director, Y&R Melbourne: "After interviewing Monash academics for the A Different Lens documentary series, we quickly realised we were leaving heaps of inspiring and intelligent insights on the cutting room floor. We didn't want them to go to waste, so the Build Your Own Documentary platform was born. This gives people the chance to sit in the director's chair and dictate what they want to see."

After watching their unique edit, each user will be served a tailored list of courses relevant to their selections to help them discover the range of degrees on offer at Monash.