Modulab: Innovation and Magic in the Heart of Bucharest

Trends and Insight 424 Add to collection

Paul Popescu and Ioana Calen, the founders of Modulab talk to LBB’s Adam Bennett about harnessing the artistic potential of technology

“Our work is about creating interactive installations which give the viewer a magic experience.” This is how Ioana Calen described Modulab in her 2015 Ted Talk, ‘Developing Expressivity Through Technology’.

So what exactly is ‘magic’ about Bucharest-based creative lab Modulab and their approach to technology?

The brainchild of transmedia artist Paul Popescu and journalist Ioana - who are now joined by Maker Matei Popescu, Creative Director Ana Carlan, CAD Specialist Sorina Dumitru and Designer Vlad Osiac-  Modulab was founded in 2007 to explore the fluid and mesmerising space where wonder and technology meet – and that’s certainly a magical place to be.

“Most of the ideas of the magicians and alchemists from the renaissance period and the medieval ages are now enabled through technology,” says Ioana, who points out that many of us still regard technology as ‘magical’ because, “people are using a lot of tech but very few understand how it works”.

Many of Modulab’s projects are experiential installations,  which allows the team to observe public reactions to their work. Ioana reckons the positive response arises because even the most cynical adult wants to experience that pure wonder of being a child who believes in fairies or Father Christmas. “The feedback that we receive from people coming to our exhibitions is that the experience is ‘magic’ because they don’t understand how it is possible. People tend to be very attracted to this side of the experience because I don’t think that there is any other domain that can offer this for adults. It is very easy to offer a magic experience to kids but with this kind of technology you can create a magic experience for adults”.

Looking at some of Modulab’s previous exhibitions, it’s easy to see where this ‘magical’ sensation comes from. In 2014, the studio provided four museums (in Amsterdam, Bucharest, Bergen and Stockholm) with an elastic screen which users could touch to create a firework-like visual effect. The colour of the user’s firework would depend on which museum they were visiting, and all of these screens displayed the fireworks in unison. Modulab had people communicating with each other through visual prompts across thousands of kilometres. You don’t get that in paintings.

So are Modulab a part of a new, tech-driven age of artistry? Is technology allowing us to interact with art in new ways? Ioana says that technology provides a more direct connection. “I think all art is interactive in the sense that you have to interpret it in order to perceive it as art, but with technology there is a more direct connection between the work and the visitors because the artwork answers the behaviour of the visitor. If we speak about a picture or a statue or something like that, even a movie, the artwork in itself does not directly respond to the actions of the viewer.

“With interactive art the artwork itself develops behaviours according to the input and feedback from the visitors. That is unique.”

It’s the sort of thing that should be catnip to advertisers, but as Ioana’s co-founder Paul explains, it has taken the industry some time to fully understand what Modulab offers. “When we first started in 2007, we tried to get in touch with advertising agencies and explain our capabilities, but they didn't believe that the solutions we were proposing were actually technologically possible. They thought that we were talking about ‘sci-fi’ ideas, and that their clients weren't ready for this type of approach.

Ioana adds, “We did initially try to go to ad agencies, but we gave up. We weren't very good sellers, and we weren't good at not taking no for an answer, so we gave up very quickly. We just said “OK” and that we would focus on something different and the arts scene and the design scene was more prepared for our approach at that time. Happily we are seeing a much more even split today”. 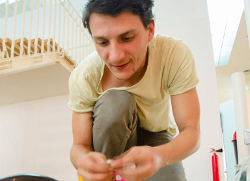 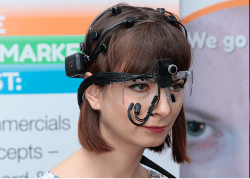 Above: Paul and Ioana, the Co-Founders of Modulab

So how often do Modulab get asked to create more commercial work for advertisers? “During spring and autumn we are approached very frequently, because it’s the period when the most events are happening here,” says Ioana. “We usually have more than one project a month, and now we sometimes have to say no because we cannot deal with all of them. We are at that point when sometimes we are overloaded, but we are not overloaded enough to make a big step up and move into a bigger place and have to expand the team and so on. So I think we are on that tipping point and in a very short time we might need to expand the organisation.”

And where is that organisation headed? What does the future hold for Modulab? “I think within the next five years Modulab will have a consultancy department that will only do technology intensive marketing consultancy”, Ioana tells us, “because we've been doing that for a while, mostly for free as a part of our relationship with a client. But I think that in time this will be a separate line of collaborating with Modulab.

“Also in the future, I think our clients will not only be Romanian. We will be looking more overseas. I think it will of course be a qualitative advancement but also in terms of quantity”.

Paul adds, “At Modulab we are also preparing a new online platform that is focused purely on the advertising sector. We are preparing this right now, and this will launch, we hope, in the next year”.

Next year Modulab will be celebrating its 10th anniversary and founders Ioana and Paul show no signs of slowing down. If anything the scale and scope of Modulab looks like it’s growing. In a moment in history when it seems that world definitely needs a little more magic and wonder, the timing couldn’t be better for Modulab’s blend of art, technology and digital smarts.