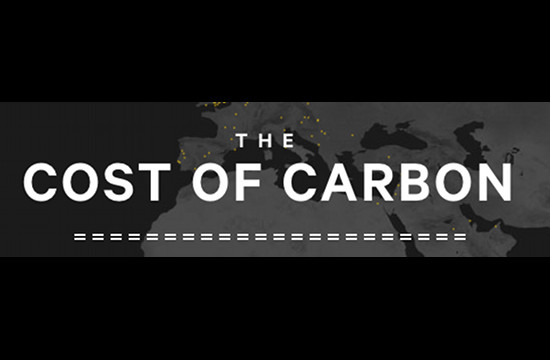 Today, The Climate Reality Project is announcing its 3rd annual global broadcast, 24Hours of Reality: The Cost of Carbon, which will livestream its programming from Los Angeles starting tomorrow at 11am for 24 hours, with intense coverage exploring the price people are already paying around the world for carbon pollution and why world leaders need to step up and make a change.  To accompany this year's program, The Climate Reality Project  called upon New York based creative technology studio,  Modern Assembly to design and develop what  hopes to be the largest-ever interactive conversation about the cost of carbon pollution around the world.

Coined ‘The Carbon Tab’, Modern Assembly created a user-generated data visualisation of the 'cost of carbon' that invites people to go online and discover the costs of carbon they are incurring on a daily basis (you can view a video of how it works here). People are invited to connect through their social networks, share their share their cost of carbon results, and even see which of their friends are the most at risk for climate change related disasters.  Users who add their 'cost of carbon' to the website will have their results live-streamed into the 24Hours of Reality broadcast and will be encouraged to send their Cost of Carbon assessment to world leaders of 20 of the the most carbon-polluting countries via social media and demand action on climate change.  Former VP and President of the Climate Reality Project, Al Gore, along with a host of international business leaders, advocates, celebrities, and political figures (a full list can be seen at the bottom of the page) will be promoting this initiative throughout the 24Hours of Reality live broadcast.

“Carbon pollution is changing our climate and transforming our world – with profound and costly consequences for governments, communities, and individuals alike,” said Maggie L. Fox, CEO of The Climate Reality Project. “This year’s event will be a major step forward in the social revolution for climate action. Together, we’ll assess the collective and individual costs of carbon pollution we all are paying and call for lasting solutions that will change the course of our future.”