Coinciding with the launch, MMA Announced the return of it's events the 'MMA Forum Vietnam' and the 'SMARTIES Vietnam Awards' 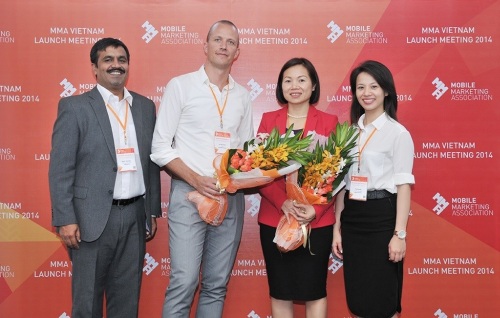 The Mobile Marketing Association (MMA) announced the official launch of its local chapter in Vietnam on 25th March 2014, with an event at the Pullman Hotel in Ho Chi Minh City, Vietnam. MMA currently leads the growth of mobile marketing and its associated technologies in Singapore, India, China, and Indonesia. The launch of the Vietnam chapter marks MMA’s commitment to building and implementing mobile marketing best practices in the country.

Responsible for shaping the dialogue around mobile in Vietnam in the coming years, the pair will be supported by three other founding members: Tran Thi Thanh Mai, General Director of TNS Media Vietnam; Phan Dang Tra My, Co-Managing Director of Admicro, and Nguyen Anh Tuan, Sales Director of Adtima (a member of VNG).

Commenting on the launch, Rohit Dadwal, Managing Director of the MMA in APAC said, “One of the fastest-growing smartphone markets, Vietnam recorded a 156 percent surge in smartphone volume in the first three quarters of 2013 and is a significant market for mobile advertising. The presence of the MMA in Vietnam will be a critical factor in helping to quadruple the country’s mobile marketing industry revenues by 2015, encouraging development and interaction among players in the ecosystem which includes local providers of telecommunication services, advertising and media agencies, marketers, brands and technology companies.”

In addition to the launch of the Vietnam chapter, MMA also announced the 2014 return of its two flagship events, MMA Forum Vietnam and the SMARTIES™ Vietnam Awards. The MMA Forum (MMAF) Vietnam, is the biggest mobile marketing event in Vietnam and will take